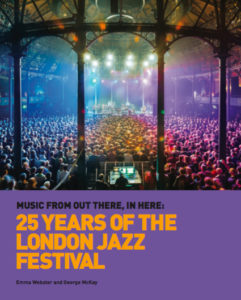 Emma Webster and I are delighted to announce that our history of the London Jazz Festival, and of jazz festivals in London, has now been published. This is the final output of the AHRC-funded Impact of Festivals project (2015-16).

Webster and McKay have pieced together a fascinating jigsaw puzzle of archival material, interviews, and stories from musicians, festival staff and fans alike. Including many evocative images, the book weaves together the story of the festival with the history of its home city, London, touching on broader social topics such as gender, race, politics, and the search for the meaning of jazz. They also trace the forgotten history of London as a vibrant city of jazz festivals going as far back as the 1940s.

We have a small number of paperback copies available for suitable libraries, cultural organisations, festivals, researchers. If you would like one, get in touch.

We hope you enjoy our new book; do let us know.

Note: a large-print version of the book is available here.

The impact of our research is important for us as researchers, for our industry and public partners, and for our funders—from the inception event for our EU-funded Cultural Heritage and Improvised Music Festivals in Europe (CHIME) project at the EFG London Jazz Festival (a project partner) in November 2015 on we have been talking about impact as well as ‘doing’ it. In fact if you click the following link you can see and download the short presentation I gave about what ‘impact’ means and its scope in the British research landscape from that first event.

We wanted to capture and to easily visualise a sense of impact as a process through the development of the project. I thought a simple infographic-style map could do that, and we gathered information from each researcher about their key collaborative relationships and anticipated work at the start of the project, and asked them to update that a year or so later.  So we have produced two impact maps to date, one from November 2015 and second from March 2017. The aim is to capture how the work packages have developed as work is undertaken and activities completed. The maps capture the project’s scope (how CHIME is indeed chiming), but also in a way they visualise its development, its story. Here are our impact maps, side-by-side, 2015 and 2017.

Rachel Daniel, my AHRC Connected Communities administrator, who also happens to be a creative artist and researcher (see Rachel’s own work exploring drawing and medicine here), made the maps happen. We thought about using Coggle or some other infographic/mapping programme, but in the end it didn’t need to be done like that, and she used Adobe Illustrator actually. So relatively simple, I’m told—though I gather the second one was slightly (…) more fiddly. Thank you, Rachel.

Gathering the information from each researcher, and then selecting from what each submits, and double-checking with them that we’ve got it right, takes a bit of time. From one of the team we received an email headed ‘Can you read this?’ and a photo attached of a pen-on-paper sketch of her collaborations on the project. Yes, we could.