Some (up to 2020) publications about punk in which I have contributions. Others are forthcoming or planned … well, especially The Oxford Handbook of Punk Rock, which has been a LOT of editorial work, and includes a new chapter written by me as well. I am a little surprised by my own return to looking at this decades-old moment, movement, or scene, tbh.

After OH Punk maybe I will have made my peace with punk. I still haven’t made that entire memoir (OR Boy) available, have I (see below)? Returning to it so much, and so late (as it feels to me … 40+ years on, after all), I guess I must say that punk rock mattered to me, no, what I mean is matters to me, even. Weird? How much longer…?

Who can say how much [the Bomb] changed all of us,… our music,… our art…? — Crass (‘Nagasaki nightmare’ sleeve notes)

This article explores the energetic links, contradictions and tensions in Britain between a musical subculture at its height of innovation and creative energy—anarcho-punk from around 1978 to 1984—and the anti-nuclear movement, including the social movement organization the Campaign for Nuclear Disarmament (CND), during these same years when CND was at the second peak of its national and international prominence (its first having been in the late 1950s and early 1960s).

It identifies and interrogates the anti-nuclear elements of the musical package of anarcho-punk, looking at its leading band, Crass. Anarcho-punk was notable by its insistent political focus on war and the threat of nuclear destruction, and it presented a relentless cultural critique that drew on apocalyptic realities and drew post-apocalyptic imaginaries.

The article offers a critical discussion of the often rich lyrical, visual, and performative texts Crass made, and explores key ways in which anarcho-punk also interrogated links between the nuclear and music industries. At the article’s centre is an exploration of the neglected question of the sounds of Crass’s music and singing voice—my term is Crassonics—in the very specific context of anti-nuclearism: if the bomb changed music and art, what did the new music (of protest) sound like, in their portfolio? (How) could trying to articulate the inexpressible (nuclear horror) and express an adequate outrage at its possibility even produce a listenable popular music?

Click on this link for a FREE open access PDF:  They ve got a bomb article Rock Music Studies 2019

[foreword to the 2016 collection on anarcho-punk, Mike Dines and Matt Worley, eds. The Aesthetic of Our Anger]

This essay is focused on (post)subculture and disability and specifically on punk rock. It aims to extend our understanding both of punk itself and of subcultural theory, adding to ideas around postsubculture by cripping it, that is, by identifying the sounds and styles and bodies of the disabled, who are the neglected already-present of punk, and whose presence disrupts subculture theory, even while such theory exists in large part to understand the disruptive potential of gesture, music, youth, fashion, attitude, and modes of walking and talking. Here I concur with, and seek to develop, the observation by David Church that “disability has been one of the most foundational—and yet, one of the least explored—representational tropes of the punk milieu”.

The essay contains two main areas: an initial discussion of subculture and counterculture in terms of theory and of disability and a focus on the original British punk scene of the late 1970s and three major artists, varyingly disabled, from it: Ian Dury, Johnny Rotten, Ian Curtis. It concludes with a view of punk’s “cultural legacy” in the disability arts movement….

OR Boy: A Norfolk Punk Spills the Beans

… there is just one thing I should like to say, about those monuments they have erected to the men that fell in cruell and greedy war. They have put on them ‘For God and Cuntry’. The People think wen they read them words that a good God ment that his human beins should be murdered for the lust of Nations, and there greed…. Now they talk about disrament, yet still the cuntrys go on making killing mashiens for the purpose of murdring there fellow men. It may be that I do not hold with monuments.—I Walked by Night

Have you ever read I Walked By Night; Being the Life & History of the King of the Norfolk Poachers, written by ‘himself’, edited by Lilias Rider Haggard? It was first published in 1935, and consists of the anonymous autobiography of an English country boy written in his old age, looking back on his life through the later nineteenth century and early decades of the twentieth. It is probably the most famous of the East Anglian rural memoirs, due to the attractive power of the textual voice. The unorthodox writing style, spelling, and sometimes dialect language—I thought when I first read it in deepest north Norfolk in the frozen winter of 1984, fresh from my degree in Englit and hiding from my future, that it was touched with a minor modernist aesthetic.

Gaoled as a youngster in Norwich Castle for doing ‘a bit rong’—full of the old stories he’d heard about ‘the horrors of tranceportation’—the narrator remembers the unfairness of  how ‘the Justice of the Piece’ and the ‘Maderstrates’ could ‘send a Boy to Prison for killing a rabbitt’. As he concludes of that episode: ‘I know that they soured me to the Laws of the Land’. (In a wonderful capture of how to write spoken Norfolk, he spells the word naked ‘naket’; a hawk is a ‘hork’.)

My copy of I Walked by Night, the 1948 ‘bound cheap edition’, is a hardback with a lightly embossed set of small animal footprints in a corner of the front cover, difficult to see.

In a short preface, the editor (daughter of the Victorian novelist H. Rider Haggard) offers a version of how the book came about: ‘It is entirely his own work, but it is not as it appears here, as it was in no way consecutive. It came to me on letters and on scraps of paper, in old exercise books, on anything that was at hand…. I have done but little pruning; most of my work has been arrangement of material so as to make the book a narrative, with the incidents in their right places’.

Well reader, I have been given what is in some ways a not dissimilar memoir, though it is one about the punk rock movement in Norwich and Norfolk in the late 1970s and early 1980s, and much shorter than I Walked By Night. Here is how the MS came to me. In 1996 I was doing some press publicity for my first book, Senseless Acts of Beauty, and in an interview with the

Eastern Daily Press or Evening News from Norwich, I happened to mention in passing that I might one day like to write more about radical East Anglia. In the newspaper article that became something like ‘His next project is a book called Radical East Anglia’, and a surprising number of people read that statement and got in contact with ideas and suggestions, and offers.

A scrappy collection of papers arrived, via someone who knew someone who knew me,  with a cover sheet saying OR Boy (the title needs to be spoken aloud, the letters of the first word spelled out, to get the joke). At that stage I’d  only written one book, but someone out there seemed to think I’d
be capable of editing their own messy memoir, shaping it into something slightly more coherent. I was flattered and curious, and, when I started reading, excited. Now I was walking by night!

In their youthful earnestness, or their overwritten stylelessness, or their attempt at mythic depth, or their effort to write the musical landscape of the countryside, these writings really appealed to me. I thought (still think) they should be published, but they were not, nor, to date, have been. I now have the agreement of the author to make them available here, on this website. On one condition: the author’s continued anonymity. The plan is to ‘publish’ one chapter at a time, in order, over the course of a year or so.

Are you ready? Are you interested? We’re starting soon. I mean, we are starting as soon as there is some interest … 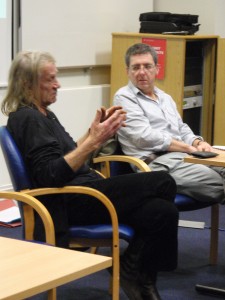 Then was America / We went there … /All the English groups act like peasants with free milk.—The Fall, ‘C’n’C S.mithering’

… There was something of an antagonistic relation between Britain and the United States in the punk side of popular culture, as seen in the song ‘I’m so bored with the USA’ by the Clash, a boredom which understandably lapsed when American stadium rock success and, later, Levi’s advertisements came along. Anarcho-punk band / collective Crass are typically more direct, concluding one song which presents American airbases, fast food and popular culture as facets of a cultural and military imperialism: ‘ET go home, Mickey Mouse fuck off’. There are more interesting narratives than these, though. Here’s the Fall again, with one of Mark E. Smith’s ‘crap raps’….

Am I a walking contradiction?… Oh yes, I’m not. —Johnny Rotten

One reply on “Punk”

Ended up here by chance and enjoyed your post. Will take the time to read more soon.