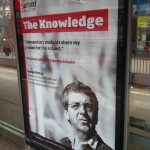 I am currently a REF21 panel member for Unit of Assessment 34, Communication Cultural & Media Studies/Library & Information Management. From 2012-2019 I was an Arts & Humanities Research Council Leadership Fellow for the Connected Communities Programme.

In November 2014 I moved from the University of Salford to UEA, to a new chair in media studies, in the School of Art, Media & American Studies.

Below are key activities I have been involved in since 2010. (TBH I am not really updating this. I mean, does anyone even read it?)