As in playing music, and writing it, not writing about it. I’m a semi-pro double bassist, playing mostly jazz and improvised music, writing a bit, playing locally for my own pleasure. On these pages you can find out about my musical history—bands and projects I’ve been involved with in the past, over 30+ years—as well as my current music. Gigs are listed here. Scroll down or look at the drop-down menu and you’ll find information about my playing in the following places and times:

Also on these pages are some images of bands I have been in—and occasionally out of—over the decades. There are probably a few more to be added… (Recordings! I need to put some of the older music up too.) Recognise yourself? Do get in touch. I can safely say that almost all the musicians I’ve ever been lucky enough to play with I’d be pleased to hear from, really. And only one ever was a prize asshole, that I can remember.

I moved from playing acoustic guitar when I was 13-14 to bass guitar aged 15-16 in the mid-1970s to double bass at the age of 23, and have stuck with double bass ever since (and indeed the same instrument for over a quarter-of-a-century until 2010. Then I bought myself a 19th c. German bass, which generously improved my sound. I had significant work done on this bass in 2010 and, as my physical capacity diminished, in 2020).

To a large extent I am what is called ‘self-taught’, except for my formal weekly training when I worked with Community Music East in Norwich in the mid-1980s, and a regular arco lesson with terrific cellist Maja Bugge in Lancaster for a year or so around 2013. Obviously I have also learned from practically everyone I’ve ever played with. (I would really like to spend a year or two with a double bass tutor working on arco technique, reading and jazz theory, if I could find a really good player and teacher now in the Norwich area, please.)

Here is a recording and video from 2020, made with Chris Dowding (cornet, fx) and Paul Thompson (film) during the pandemic. It’s a version of a well-known 19th c. Sacred Harp shape-note piece, ‘Idumea’. (See here for sheet music.)

And here’s a snippet of some other footage I like, from when hymn played in Norwich a couple of years go. The band following us, a blues duo of guitar and voice, asked us after our set if we’d join them for their first number, ‘a swampy slow bluesy vamp, Dm to F and G, then round and round’, the guitarist whispered. The piece ended up being about 10 minutes long, and this is one of them.

Having moved (back) to Norwich in late 2015, I began looking for some interesting music and musicians to play with, a band or two to join or form. I found a local luthier who rehaired my bow (it was practically bald), and I put some brand new strings on the bass in preparation. Was itching to play some gigs! I managed to get involved in making a variety of sounds, from English folk to Jewish cabaret, electronica to improv, modern jazz standards to original compositions. Most of the bands below are available for booking, folks  (support live music, especially after the pandemic), you just got to get in touch:

is named after an old-now-no-longer-there pub by the market-place in Norwich. It’s a fairly acoustic folk band, specialising in traditional and original songs about East Anglia. The five-piece line-up is as follows: acoustic guitar, lead voice, banjo, hand percussion, double bass, with some doubling and harmonies/shared vocals. Bit of a new thing for me, playing English (well, any) folk music—I really like it in this band. (Of course, perhaps the fact is that I am just trying to channel the late Charlie Haden here.)

When I heard some of main songwriter Tim Lane’s own songs and traditional repertoire about Norfolk life I thought I want to play that, and now there is a band. We did a few private party gigs as part of the rehearsal process and there were some public ones in late 2016 and 2017—St Andrew’s Hall during Norwich Beer Festival in October, the folk club in Bury St Edmund’s in November—and we have expanded further since. Find out more on the band’s Facebook page, or on our website. Here are three songs from our 2019 EP, available also on CD, Songs From the Big Sky.

Below is a film of one of the shows we played the music for in Crude Apache’s summer 2018 touring musical play about life on the old Norfolk Broads, At the Turning of the Tide. It opens with a couple of numbers by us, acoustic and al fresco, and there are four or five other songs through the play to enjoy too.

And here is a live video film and recorded by Al Pulford in a shoot at Jurnet’s Bar, the medieval undercroft on King Street, Norwich in 2019.

is a composed and improvised band featuring Chris Dowding on trumpet/flugelhorn, loops and effects, Dave Ross on analogue effects/percussion/mouth harp/various things, and me on double bass. Here is a short film of us playing at Platform 12, Norwich in May 2017.

We have mostly been rehearsing Chris’s lovely spacey, empty tunes of heads—brass and bass harmonies—and then seeing where each takes us. The titles of most of our pieces are numbers, chosen from an original set of hymn number cards as used in churches … e.g. ‘153’ or ‘521’. I’m delighted to be playing with these guys, whose soundscapes are warm and inventive … there’s more at the band’s page on Chris’s website here. Click to listen to one or two of our live recordings: 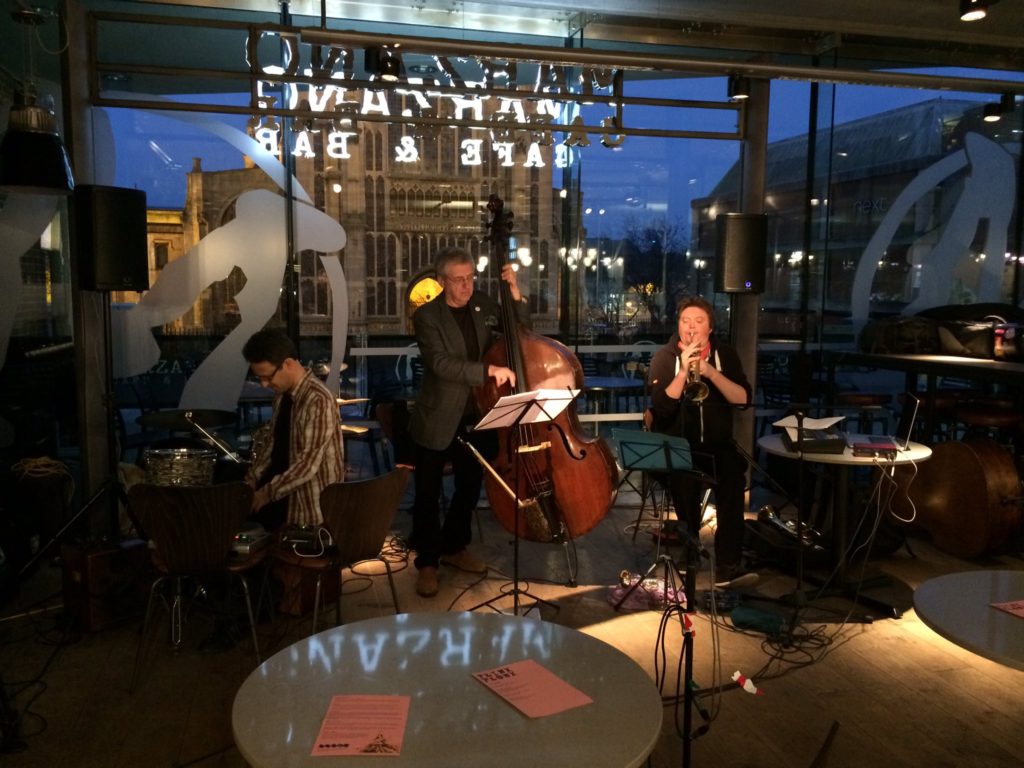 feat. Joey on accordions, piano, voice, Chris on trumpet, me bass, playing Joey’s songs, which I describe as sort of English/Jewish folk, with improvisations. He calls his music ‘horror folk’. I’d say with added semi-tones and a bit of cabaret. Here is a photo of us playing in one of those extraordinary medieval undercroft bars Norwich can surprise you with, Jurnet’s Club on King Street, and, below, a video of us doing Joey’s ‘Play with fire’, early 2017.

One reply on “Music”

Interesting.Some music would be good. Anything from your long and active past in music?