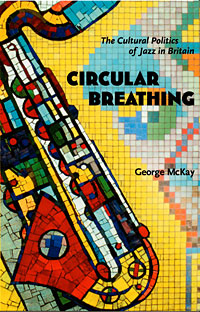 an important contribution both to British jazz history and to British cultural history, the first volume to do both since [Eric Hobsbawm’s] The Jazz Scene of almost fifty years ago. Dave Laing, Popular Music History  (2006) (UK)

This is a book that has been waiting to be written for some time, namely a survey of aspects of postwar British jazz from the perspective of cultural politics. McKay tackles head on the knotty question of why New Orleans revivalism, and later the free improv movement, had such close links to the politics of the left. Woven through it is a fascinating web of observations about the reception of American culture…. [McKay] has trawled through an impressive amount of jazz literature and propounds some stimulating thoughts about why jazz has always been a counterculture in Britain. Alyn Shipton, Jazzwise (UK)

Circular Breathing provides its readers with the chance to understand the place of [Jamaican experimental saxophonist] Joe Harriott in the story of jazz in Britain…. George McKay … use[s] jazz in Britain as a way of talking about such topics as blackness, whiteness, masculinity, shifting imperial identities, and postcolonialism. Laurie Taylor, Thinking Allowed, BBC Radio 4 (2006) (UK)

The complex business of reading American jazz—already a mixed-race hybrid—in its British contexts,  of finding an indigenous (or global, postimperial) voice in an American form, has been masterfully explored by George McKay in his study of the ‘attitudinal culture of [British] jazz’, Circular Breathing. Howard Malchow, Special Relations: The Americanization of Britain? (2011)

George McKay’s book plugs a significant scholarly gap and provides a much-needed cultural history of jazz in Britain…. [An] impressive work…. McKay presents a sophisticated, convincing, and well-made argument…. [H]e redresses a balance and confirms jazz’s role in Britain’s postwar counterculture. McKay also brings out valuable insights into the issue of race and Britain’s postcolonial identity…. This book is a hugely impressive, detailed, and fascinating cultural history of jazz in Britain and should be recommended not only to cultural historians but also to historians of the Cold War, the British Left, and those interested in race relations and national identity in twentieth-century Britain. James J. Nott, American Historical Review, 112(1) (February 2007)

It is only by reading Circular Breathing: The Cultural Politics of Jazz in Britain, George McKay’s skilful examination of race relations, gender issues, and the Left in relation to British jazz, that we can understand why British jazz wasn’t at the centre of the European free-jazz revolution. As McKay meticulously recounts, British jazz before 1960 was dominated by ‘trad’ and leftist marching bands that lacked musical discipline and training.… While some of the musicians he interviews are impatient with his questions about race, gender, and politics, and though his resistance to definitive conclusions can be frustrating, McKay’s explorations of social trends extends to his own ideas, and his willingness to question his own theories often results in valuable and imaginative scholarship. Stephanie Hanson, ‘Kind of bleu’, review article, BookForum (Dec 2005/Jan 2006) (USA)

As a British cultural historian … George McKay is the real deal: the book demonstrates the remarkable reach and relevance of this school of criticism (Cultural Studies).… In fact, this book becomes massive in its scope: British jazz becomes a lens through which to view the shifting hegemonic power of 20th-century culture from Britain to the United States.… Richard C. Taylor, Altar Magazine (no. 6, Winter 2006)

The book is driven by McKay’s conviction that jazz is a highly political music and his steadfast refusal to view jazz as pure musical practice. ‘Frankly, I see nothing but worry in the effort to depoliticize the musical scene. My aim … throughout the book … is precisely to challenge such an interpretation’ (p. 241). And challenge it he does. Circular Breathing is painstakingly well documented with copious references, including a myriad of personal interviews with activists, musicians, and fans. Through this long journey, many fascinating stories and unexpected facts are revealed, while a host of questions, contradictions, and paradoxes are explored. Robert Rawlins, Music Library Association (63:1, September 2006)

That this book so readily suggests avenues for further research is not the least of its strengths. George McKay has made a major contribution to understanding what happened in jazz in Britain and why it happened. Annual Review of Jazz Studies, vol. 14 (2009)

McKay’s study is the antithesis of and antidote to … lazy cultural schemata.… [H]is basic thesis concerns the way jazz in the UK became the site of various identity formations, along axes including ethnicity, political beliefs, gender and class. The study includes correspondence and interviews conducted specifically for the project and, in evaluating such evidence, McKay manifests that crucial characteristic of the best research, a readiness to be surprised and puzzled at what he discovers, leading to parenthetical hesitancies that more theoretically inflexible academics prefer to suppress. Inevitably, his investigation traverses issues of modern musical diaspora.… The larger value of his study is … the incisive analysis of the way context creates the meaning and function of text. His enquiry into the role of UK jazz in articulating various identity formations leads him into space overshadowed by the hipper images of UK white, male musical bop-heroism, such as the contributions of Jamaicans and South Africans, of women, and of the oft-scorned traditional movement with its image of the musical folk primitive.… [H]e rescues certain kinds of music from the realm of corniness to which much scholarship has consigned them. Bruce Johnson, ‘All music is popular music’, review article in arts journal Arena (2007) (Australia)

McKay has written an excellent study of one of the many new cultured and cultural spaces of postwar England. His emphasis on space and culture, gender and space, and race and identity make this a strong work well worth the time to read.… [H]is book places the playing and study of jazz music in clear class terms as few scholars have done before him. G.J. Marshall, Journal of British Studies (2006)

It is absorbing, closely argued, provocative if occasionally frustrating, in sum a work of considerable originality and value in the broad fields of modern British cultture and jazz studies in general. Peter Bailey, Humanities and Social Sciences Online (2006)

This well-written, witty, and highly original book addresses topics not previously given much thought in print.… McKay is especially good at exposing the subtleties of an issue. Lewis Porter, The International History Review (December 2006) (USA)

… he examines not just the more obvious connections with protest organisations such as the Committee of 100 and CND, but reveals the way complex issues such as race, gender and changing imperial identities were all explored by successive generations of jazz musicians. McKay’s analysis is enriched by the extensive interviews he has conducted with activists, musicians and fans, giving the book an immediacy and interest that reliance on documentary sources alone can never achieve. A useful and thoughtful action on McKay’s part is to place the interview transcripts and a large body of the letters generated by his research online. Martyn Everett, New Humanist no. 67 (28 June 2006)

McKay is particularly strong in describing this process [of the internationalism of] jazz in Britain since the 1950s, highlighting the extraordinary cultural mixing that has defined the music in the U.K. Choosing to begin his narrative with the founding of George Webb’s Dixielanders in 1943 (rather than the arrival of the Original Dixieland Jazz Band in 1919), McKay probes the trad boom in Britain in the late 1940s and 1950s to reveal how it became located within the broader forum of political protest within the Campaign for Nuclear Disarmament. This is a very valuable study. Stuart Nicholson, Jazz Times (January/February 2006)

This book was published with the support of an Arts and Humanities Research Council research leave grant.