His research and teaching interests are in alternative culture and media, the cultural politics of popular music—including jazz, punk—disability, festivals, and gardening. He has written or edited numerous books and collections in these fields—extensive information and links about which are available elsewhere on the site.

He writes for both academic and non-specialist audiences, though not necessarily in the same book. So he has produced research monographs, aimed primarily at a university readership, and also written books for the informed, more general, reader, in particular for those interested or engaged in social activism,  music-making, community and cultural action. (You can read an academic analysis of the pitfalls of writing about activist culture in Keith Halfacree’s ‘I could only do wrong’, which discusses George’s position in his early writing, and its reception by some of the radical groups involved and under discussion.)

He appears intermittently in the media as an ‘expert’ talking about his work, and related areas such as protest, counterculture, social movements—see Media and Contact pages for further information.

One of four children, George was born in the Cowcaddens, Glasgow, in the 1960s, in a tenement apartment above the Park Bar on Maitland Street. With his older sister he attended Milton Street Primary School.  This entire part of the inner city was demolished within a few years, along with many neighbouring streets where his extended family lived, and had lived for generations, to make way for the M8 urban motorway. They were all moved to council houses and flats, mostly out in Easterhouse, though George’s family were moved to one of the new council tower blocks in Maryhill (Cedar Court). When he began writing about the radical environmental movement of anti-road protest in the early 1990s he slowly came to understand the power of the political unconscious.

Joining the Scottish diaspora in the late 1960s, his family ended up in Norfolk, England, living first in a caravan in Great Yarmouth on the east coast, and then different houses in and around Burnham Market, north Norfolk. He went to primary schools in Yarmouth and Burnham, then to secondary schools in King’s Lynn (King Edward VII grammar) and Norwich (Blyth-Jex comprehensive), where his family settled. He himself returned to Norwich in 2015, after nearly 30 years away.

He went to Hull University in 1979 or 1980 or so, which, uh, didn’t really work out, but then graduated from Hull College of Higher Education in 1984 with First Class Honours, so that must have suited him better. He returned to the city of his birth for doctoral study, in the English department at the University of Glasgow, 1988-91. Throughout and beyond this student-long decade he was an anarchist, squatter, painter and decorator, unemployed, punk rocker, community musician, erstwhile jazzer. He is still some—well, probably one, at least—of these, and writes about some of the others. 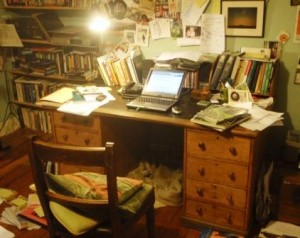 Here’s a 2014 interview with George, published in the Eastern Daily Press on the occasion of his return to Norwich after decades away. Here’s another, from 2011, by Ana Carolina Prado, in the Brazilian magazine Revista Superinterresante. Here’s a 2009 interview in Ziniasklaida ir Politika, from Lithuania, by Dzina Donauskaite, about  grassroots politics and culture. This came from a meeting of some Lithuanian New Leftists George spoke with in Vilnius that January. And here, again for you Euro-linguists, is a 2002 interview with George by Josien Pieterse in the Dutch radical magazine Kunstenaarswijzer, no. 35.

9 replies on “About George”

[…] film about David, Wandering Abroad and her current gardens of resistance project; Kasia Boddy and George McKay on ‘radical gardening’ (all relating to the David Oluwale Memorial Garden, starting […]

Quote -“King Edward VII Grammar School, King’s Lynn, 1973; bottom left. ‘McKay, you’ve got an attitude problem, laddie’. Every boy I knew had an one; it was the school’s special gift on arrival.”. I still have mine – I remember being disgusted at having to have line up for the photo by DES.
Colin Jenner, front row, centre.

I just finished reading your wonderful book Radical Gardening: Politics, Idealism and Rebellion in the Garden. I read this book as a wonderful procrastination tool while producing my own documentary. In fact, I think this book itself is worthy of a documentary project and I do hope some smart documentary maker will contact you about such a project.

Biking and Gardening always seemed ripe for exploration, for me- being someone who grew up in Brooklyn, and always delighted in her own flowerpots on a fire escape and loved working on community plots while biking to and fro, I always wondered why more people did not embrace such friend making, exhilarating experiences. Your book help me see myself a bit, and helped me understand that I am part of a larger group of people who do not reject the world or material goods by biking or gardening, but rather in our own way choose to intensify the experience of being part of this world.

I borrowed this book from my local library and I am now sure that I want to order a copy through Powell’s and have my friends pass it around.

Thanks so much, Edie

Why thanks Ailsa. That was a passport photograph I think, taken against a white door at Old Tiles, Front St, Burnham Market, Norfolk. There were no photobooths around then near us. I wonder what I was thinking about.

I really like all the pictures – yes, I can see them! I especially like the one of you in 1971… That’s pretty cool…

Great website, I suppose I ought to do one for myself!