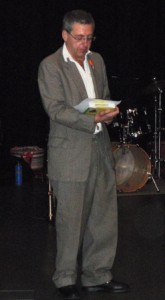 A number of events were organised through 2011 and 2012 to disseminate the ideas of Radical Gardening. Indeed, invitations continue, as I develop parts of the research in newer directions. If you would like to invite me to speak at your literature or arts festival, or radical  / independent bookshop, or university, or gardening / campaign group, say, again, do get in touch (details on Contact page)—I am keen to come and talk with people about the work. Other dates and events are under discussion and still being added.

‘In our second [in the new Guardian podcast series Sow, Grow, Repeat], Alys Fowler and Jane Perrone look at some of the ways you can garden without a garden. They explore the history and importance of allotments with Sara Jane Trebar of the Save Farm Terrace campaign; George McKay, author of Radical Gardening: Politics, Idealism and Rebellion in the Garden; and journalist and allotment holder Lia Leendertz. Finally, urban gardener Gayla Trail reveals what it was like to guerrilla garden on a busy public corner in Toronto, Canada.’

Re-imagining Rurality invites spatial practitioners, writers, artists and others whose work relates to the built / cultivated environment to re-consider ideas of rurality by interrogating the representations, designs and cultural values of new and traditional rural landscapes and settlement forms. It asks what the role of creative practice should be in constructing, de- constructing, or maintaining rurality. 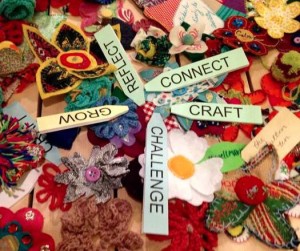 Reading from Radical Gardening, part of the Craftivist Garden Party day of ‘quiet activism’, and evening of ideas.

Marabouparken artspace and public garden, Stockholm. A lecture on the politics of gardens as part of the On Invasive Grounds exhibition.

Keynote lecture for the 16th Iberian Association for Cultural Studies conference, which is on the theme of SPACE 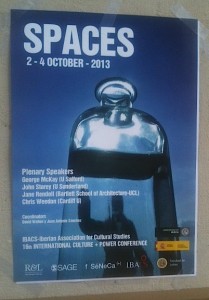 S. I’m giving the opening plenary, and my title is ‘Polemic space, protest, and the garden’. From my introduction (though I don’t like the inelegantly contradictory ‘larger … sub-project’ phrase and may change it): ‘In the terms of this conference, it’s a matter of looking at an uncool, apparently apolitical social-cultural space and practice—the public or private garden, the dirty seasonal act of gardening—and asking questions about where aspects of power manifest themselves in there, and / or are hidden, challenged, subverted. It’s also to acknowledge that this particular book [Radical Gardening] is a very small part of the larger cultural studies sub-project to disseminate our hard-earned, threatened (it feels, from a British university perspective, at least) knowledge about, say, the operations, achievements, history of culture as critique and as engine of social justice to as wide an audience as we can.’

As part of the AHRC’s Connected Communities Showcase day, speaking with people in a marquee at the farm in the evening. A bonfire, free food, chai, home made cider, gardens, politics and ideas….

Keynote address, dOCUMENTA closing conference, Disowning Life: A Conference on Seeds and Multispecies Intra-action. The conference is held over two days, 10 and 15 September, with the first day’s subject being multispecies, and the second day (when I appear) on seeds. Title and lecture abstract:

‘Horti-countercultural politics’
In my 2011 book Radical Gardening I coin this I am afraid hugely inelegant phrase to discuss the place of the garden and the polemic landscape of plants in alternative cultures and social movements. In this lecture I explore some of that recent history, arguing that, rather than simply a retreat of rest and repose, the garden has been also a site of ideological contestation, social confrontation, and critical utopian experimentation. Seeds will figure too somewhere.

According to Permanent Culture Now website, the film of this lecture is ‘ESSENTIAL LISTENING!!’ 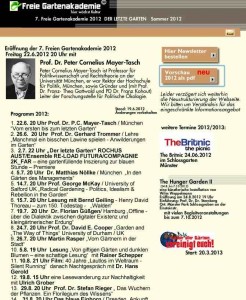 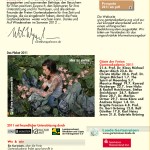 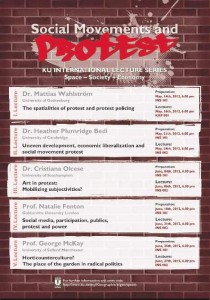 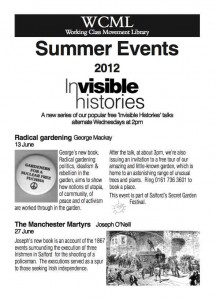 Free lecture in the library’s Invisible Histories series, rescheduled from 30 November 2011 (postponed then due to nationwide strikes, including me as a member of the UCU). Part of the Salford Secret Garden Festival, following my talk there is a guided tour of the WCML garden. Words, pictures, ideas, discussion, plants …

Radical Magazine STIR, for which I wrote a piece in 2011 about the book, organises a series of talks at my favourite radical bookshop, the highly venerable space of Housman’s, just round the corner from the British Library. I always stop in Housmans if I have half-an-hour to pass waiting for a train north from Euston Station, and am delighted now to be appearing there.

Notes from the Greenhouse blog about George’s Housmans book talk here: ‘Resistance is fertile, if you believe the radical gardener. Protest gardening is emerging as a new craze. Greenhouse PR visited radical bookstore Housmans to listen to Professor George McKay discuss his latest book, Radical Gardening. The book gives an overview of gardening as a part of political activity, discussing everything from the violence of the suffragettes firebombing Kew Gardens to the more serene peace garden movements. And if you like your puns academic and groan inducing, you’ll love slogans like Avant Gardening, Sod it!, and Horti-counter-culture.’

Radical Gardening features in the 2012 dOCUMENTA exhibition in Kassel, Germany, in the form of book extracts of the exhibition’s rather impressive website. That is, my book is included, in the language of this exhibition, the 13th dOCUMENTA in the series, as a contribution to the ‘online venue’s … resonance [of the] zones of intensity’….

Talk in the WCML’s Invisible Histories series of free public lectures. WCML, The Crescent, Salford. APOLOGIES: BECAUSE OF NATIONWIDE INDUSTRIAL ACTION RECENTLY ANNOUNCED BY PUBLIC SECTOR UNIONS ON THIS DAY, INCLUDING MINE (UCU), THIS EVENT IS POSTPONED UNTIL THE NEW YEAR. Said George: ‘So sorry about this. But, let’s face it, there is now something more important going on on that day! Along with many many public service union members up and down the country I’ll be on strike. I’m hoping to rearrange a date for early next year, if the WCML will still have me.’

Radical Gardening discussion as part of the 15th Edinburgh Radical Book Fair. Saturday 29 October, 4-5 pm (venue for the fair: Out of the Blue Drill Hall, 30-38 Dalmeny Street, Edinburgh EH6 8RG). You can read here at this link a piece I subsequently wrote for the excellent radical bookseller WordPower called ‘Botanical xenophobia, fascist gardening, and planting a heritage apple tree’. 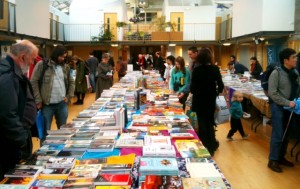 Talk about Radical Gardening as part of the second One Planet Festival (which runs across Lancaster 7-15 October), at the Dukes Theatre, Lancaster, 8 pm. Also with a film screening, vegetable display and auction possibly, and live jazz from Swerve Trio earlier, at 6 pm in the Dukes too. For more details click on the link above and there’s a facebook page for the festival as well.

An evening discussing the politics of gardening and crafts, as part of the regular Salon series in the great city of Manchester.

The current wave of interest in craft, and in particular in the process of making things for yourself, surely has its roots in recent social, political, and economic developments. It is often argued that the fashion for creative activity can be regarded as a backlash against an increasingly virtual and corporate world that promotes the passive consumer – albeit a Web 2.0 one. Alongside the grow-your-own allotment movement, the make-your-own approach enables craft participants to experience shaping their material world, creating objects that have an individual stamp and a narrative in their production. Is this just a repeat of the rural craft revival of the 1970s for a new generation, or perhaps a new twist to the fashion for eco doom-mongering?

Well, discuss. At the following venue and time:

The Shakespeare Pub, 16 Fountain Street, Manchester, M2 2AA at 7:15pm for a prompt 7:30pm start, expected to finish just after 9:00pm. Tickets are £5 (£3 concessions) payable in advance, using the PayPal Donate button on the Manchester Salon website (feel free to donate on top of the £5 ticket), but can also be paid for on the night if booked in advance by Emailing events@manchestersalon.org.uk 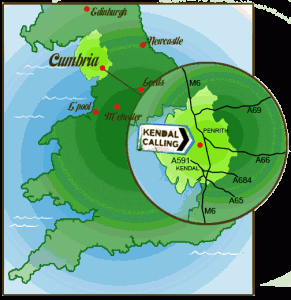 Radical Gardening is one of my two lecture topics as the festival’s very first professor in residence. (In fact, as far as I am aware, a professor in residence is a FIRST for any pop or rock festival anywhere.) I am appearing for my guest lectures on the Soapbox stage on Friday 5.30-6 pm and Sunday 4-4.30 pm. One of my talks will be about gardens and politics, and the other either about pop festival history or disability and pop. I may also be talking with some of the artists appearing about politics and pop in a Q&A, not sure.

VISTA lecture series guest, and dinner: ‘Our VISTA guest this July is George McKay, Professor of Cultural Studies at the University of Salford, author and contributor to BBC Radio, the Guardian, the Independent, the New Statesman and the Times Higher Education. Professor McKay has just released the thought provoking Radical Gardening: Politics, Idealism and Rebellion in the Garden. Radical Gardening uncovers and celebrates moments, movements, gestures, of a people’s approach to gardens and gardening. It weaves together garden history with the counterculture, stories of individual plants with discussion of government policy, and the social history of campaign groups with the pleasure and dirt of hands in the earth. George will discuss his refreshing take on a familiar subject with Tim Richardson and Noel Kingsbury. A 2 course dinner will be served following the talk. Tickets £20 each, please book well in advance as places are limited. Tickets £10 / £5 Museum Friends. Dinner £20.’