I did an ‘In conversation’ yesterday at the Thinking With Jazz symposium as part of the Lancaster Jazz Festival. It was with John Cumming, Director of London Jazz Festival and Serious Music. He talked with great knowledge and experience of the development of the festival, its origins in the Camden Jazz Festival, his own past as a theatre administrator (including working with Welfare State International, which I didn’t know–there is some material in my book Circular Breathing about jazz and alternative theatre), the way in which the communities and identity of London as a global city have influenced the development of the festival, the importance of strategic partnerships with key venues (Such as the Barbican, South Bank), the role of a festival not just on offering musicians gigs but also in their career development. 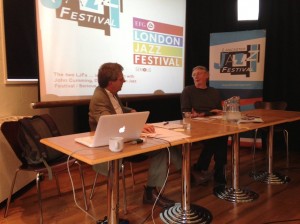 It’s the 21st anniversary of the London Jazz Festival this November, and Prof Tony Whyton and I will be doing some work with the festival. More to follow! It was a very iluminating day, actually, including contributions from Fiona Talkington of BBC Radio3, Gerry  Godley from Dublin (what a festival he runs! Called: Down With Jazz. He gave me a badge with that slogan. I wear it with pride), Pete Moser of More Music. It was organised by Dr Nick Gebhardt, soon of Birmingham City University, who happens also to be the saxophonist in Swerve Trio. Here is a cartoon from a comic produced by one of Gerry’s festivals, specifically addressing the role of the festival in professional development: 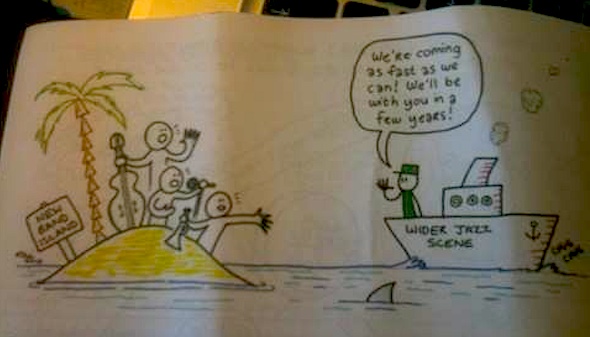