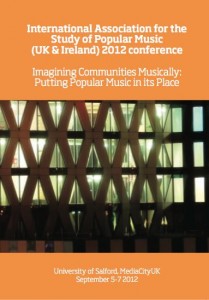 We’ve got 32 panels, over 120 speakers and delegates, coming to MediaCityUK this week for the International Association for the Study of Popular Music (UK and Ireland) biennial conference. So excited—the event has been 15 months in the making, and now it’s almost here. (It’s being reported in the press—read the Manchester Evening News version of the conference, plus MEN readers’ comments, by clicking on the MEN screenshot below.) I can’t list the whole programme here, but I can offer a bit of a taster as to the kinds of topics being talked about in panels. And there are over 25 others! Most of them are about the conference theme, Imagining Communities Musically: Putting Popular Music in its Place. For instance: