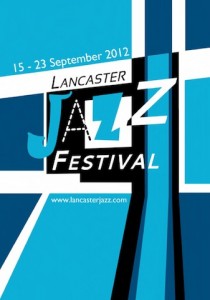 There’s a lot going on in my local jazz festival this week. Lancaster Jazz Festival used to be a big event in the city’s cultural year, organised by the Arts & Event team at the city council. Then when that unit folded a few years ago (never reconstituted—does this city even have a single Arts Officer post today? An indictment!) the festival struggled on wilfully, organised by the musicians, becoming less energetic but still committed.

Now in 2012 it’s back, through a combination of new energy and drive from a self-motivated festival team of musicians and enthusiasts, with a professional and long-term perspective and ambition. I would say the role of More Music, the leading Morecambe-based community music organisation, is important, especially in those slightly difficult to evaluate terms of functioning as a crystalliser and catalyser of music activity. Things like a music college or department, a community music organisation, a cluster of sympathetic live music pub landlords, and thriving arts venues, help the musical culture of a spot, turning it into a hotspot.

And Lancaster this week is a hotspot of jazz. (Lancashire hotspot? Sorry, that’s both an obscure and poor pun.) Headlining the festival is Andy Sheppard’s new ECM band Trio Libero, on Saturday 22 September. (I loved the last ECM album he made, Movements in Colour. We used to go see him in Bristol, blowing free with Keith Tippett 20 years ago. Last saw him a couple of years back, playing acoustically in a small space at the Brewery Arts Centre in Kendal. Fabulous duets between him and the tabla player that night.) 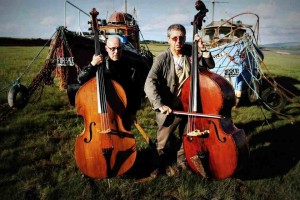 Adverse Camber double bass duo—Ken Johnston and me—are appearing twice: in a Wired In film / photography / music event on Monday 17 September 7pm in the Dukes Theatre gallery, organised—no, let’s say the correct word: curated—by Richard Davis. We accompany a film shot by Richard, which has some footage of the duo cut into it. It’s free, but you need a ticket (which you can get from the Dukes box office). Cellists, tuba  players, clarinettists, guitarists, are all doing their stuff as well.

And in fact here  is footage of a number from that very event, with Richard’s film projecting too. Then Adverse Camber are part of the jazz all-dayer, on Sunday 23 September, at the Gregson Centre. We are on in the afternoon. That’s £10 for a day ticket, terrific value for eight or more bands. 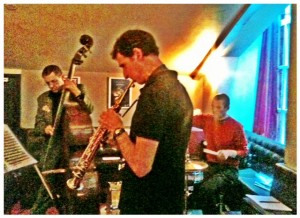 Swerve Trio have a couple of gigs too: a jazz film/music night at the Dukes on 18 September, with a Chet Baker movie as part of the deal, after the live music. The band is on early, 4.45 pm, for an hour. Hope you can get there. And Swerve have a late night jam session at the Golden Lion pub, after the Sheppard gig on Saturday night. Starts at 10 pm—bring your instrument.

Plus there is a jazz symposium, Thinking With Jazz, at LICA, up at Lancaster University, on Friday 21 September, 10-5 pm. This is in association with the Rhythm Changes European jazz project I’m involved in, and it’s been organised by Swerve saxophonist Nick Gebhardt. Special guests include the voice of BBC jazz, Dr Alyn Shipton (BBC R3 Jazz Record Requests presenter), and, from Amsterdam, Prof Walter van de Leur. Panel discussions are on Jazz and nation, Improvisations, and Cultural politics (the one I am heading up). At the end we all go down to the Dukes for the New Orleans night.