Adverse Camber is a double bass duo I’m half of, the other half being Ken Johnston. This video was filmed and edited by Barrie Marshall, Lancaster clarinettist and jazz photographer, at the Robert Gillow pub in Lancaster on Wednesday 20 March. The Gillow has live music on seven days a week, and we were the act that night, two sets, 9-11.30 pm or so. (Swerve Trio has a fortnightly residency there on Monday evenings.) It’s quite brave actually I think for a pub landlord to book an act like a double bass duo as the evening’s entertainment, so thank you Mark Cutter. Barrie emailed me the YouTube link to the footage he uploaded, and we had a little correspondence about the film / music:

GM: Thanks so much Barrie. Very steady and good quality definition video!! Wonderful.

BM: Thanks George, it was good to video because of all the bowing and the bass slapping, means I could move around to make it more interesting, what is the tune and is it one of yours?

GM: We’ve started to move from one piece into another, the first one usually played quite straight and then the second as a vehicle for improvising—so we do ‘Red river valley’ into ‘All blues’. And this one is Ellington’s ‘Come Sunday’ into one of mine, a G minor blues, called ‘Ganzirri Blues’. A simple melody but one thing that makes it more interesting is it’s arco sul ponte, ie using the bow, and playing as near the bridge as possible, to get those thin high harmonic sounds. That leads into a kind of free-ish solo, but still with a blues sense to it. Oh and there’s the percussive part at start and end, where I hit the bass with my hands to connect with Ken’s bass line—hit the back with flat of palm for a bass drum sound and the front / fingerboard sometimes with knuckles for a higher sound like snare a bit. I don’t hit this bass hard like I used to my previous bass sometimes because this one is a much nicer and historic instrument! Thanks again for videoing it. 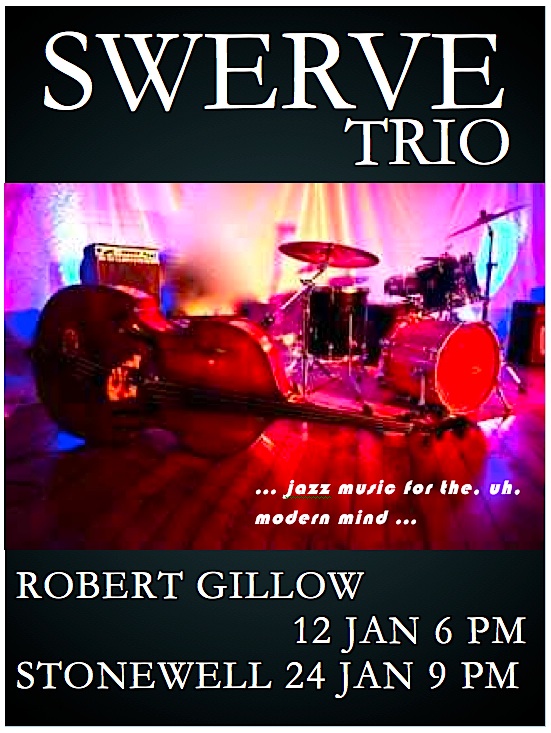