Now accessible is the film (60 mins.) of the my lecture on ‘Horti-countercultural politics’ at dOCUMENTA (13) in Kassel last month, at the Seeds conference organised by the fabulous And And And. (That’s  a quotation from Deleuze, signalling, as they explained to me over a lovely vegetarian dinner at a long table in a post-industrial ex-railway building claimed for 100 days by dOCUMENTA, not a binary and/or but an inclusive, developing and transformative—come on, they would say, revolutionary—and … and … and ….) The film of the lecture is here. The website Permanent Culture Now calls it ‘essential listening’.

In this lecture, George McKay will explore the recent history of the garden and the polemic landscape of plants in alternative cultures and social movements. Rather than simply a retreat of rest and repose, the garden has been also a site of ideological contestation, social confrontation, and critical utopian experimentation.

Disowning Life is a two-day public conference that takes as its starting point dOCUMENTA (13)’s ecological perspective, building on a global alliance between different forms of research and knowledges that is actively being developed in a variety of fields. On September 10, the first part of this conference discusses humans as only one form of animal life amongst many others. On September 15, the second part focuses on questions around food and seeds, water and land, energy and de-growth. At a time when the models of production on which our world is based have been proved insufficient, and the arbitrary division of roles largely unjust, thinking about the way in which we sustain life on the planet is not just an interesting field of research but a crucial necessity. 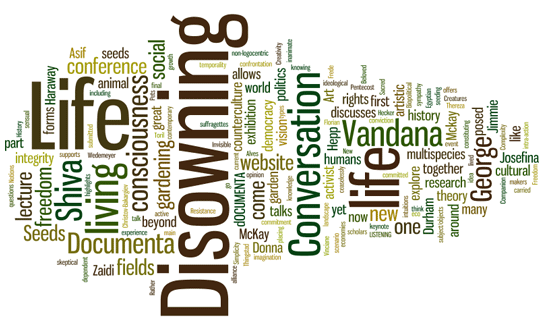 The development of a collective consciousness that allows us to think and feel in sympathy with all types of mineral, vegetal, and animal life is allowing a new narrative to emerge—one that shifts the position of humans in the constellation of the natural world, placing us in a more balanced  scenario in relation to other beings. Notions revolving around seeding and the idea of multispecies intra-action are introducing new perspectives in eco-feminism that place the problem of difference or “othering” beyond gender. Inspired by and hoping to elaborate on the interrelated horizons of two main thinkers in these fields— multispecies biologist and cultural theorist Donna Haraway and seeds activist Vandana Shiva—this final conference of dOCUMENTA (13) gathers some of the most rigorous scholars, artists, and activists in these fields together with a range of committed new voices.