Wash your smalls, feed the cactus, telephone your uncle Fred.
By the time this record’s finished everybody will be dead. — Ian Dury, ‘Ban the Bomb’ (1984) 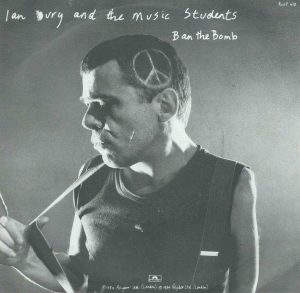 As a small response to the frankly chilling nuclear rhetoric and military aggression coming from the Russian Presidency currently here are some links to open access (free) research I’ve done over the decades on:

for anyone who wants to find out more. The blog starts with my two most recent publications, which are kind of companion pieces where I explore different aspects (pop/post-punk, anarchist/grassroots) of music and peace protest related to the punk movement. These came from research and thinking related to large editorial project of The Oxford Handbook of Punk Rock. Who knew they were still going to be quite so relevant.

This chapter is a reconsideration of the contribution punk rock made to anti-nuclear and anti-war expression and campaigning in the 1980s in Britain. Much has been written about the avant-garde, underground, independent, DIY and grassroots (counter)cultural politics of punk and post-punk, but the argument here is that such scholarship has often been at the expense of considering the music’s hit and even chart-topping singles. The chapter has three aims: first, to trace the relations between punk and cultures of war and peace; second, to reframe punk’s protest within a mainstream pop music context via analysis of its anti-war hit singles in two key years, 1980 and 1984; third, more broadly, to further our understanding of (musical) cultures of peace. Punk was a pop phenomenon, but so was political punk: the vast majority of the many pop hit songs and headline acts with anti-war and anti-nuclear messages in the military dread years of the early 1980s were a lot, or a bit, punky. This chapter argues that a wider and at the time significantly higher profile social resonance of punk has been overlooked in the subsequent critical narratives. In doing so it seeks to revise punk history, and retheorise punk’s social contribution, as a remarkable music of truly popular protest.

This article explores the links and tensions in Britain between a musical subculture at its height of creative energy – anarcho-punk – and the anti-nuclear movement, including the Campaign for Nuclear Disarmament. It identifies and interrogates the anti-nuclear elements of anarcho-punk, looking at its leading band, Crass. At the centre is an exploration of the sounds of Crass’ music and singing voices – termed Crassonics – in the context of anti-nuclearism: if the bomb changed music and art (as Crass’s Penny Rimbaud brilliantly claimed), what did the new music sound like?