The UK has been a pivotal national player within the development of community music practice. In the UK community music developed broadly from the 1960s and had a significant burgeoning period in the 1980s. Community music nationally and internationally has gone on to build a set of practices, a repertoire, an infrastructure of organisations, qualifications and career paths. There are elements of cultural and debatably pedagogic innovations in community music. These have to date only partly been articulated and historicised within academic research.

This document brings together and reviews research under the headings of history and definitions; practice; repertoire; community; pedagogy; digital technology; health and therapy; policy and funding, and impact and evaluation. A 90-entry, 22,000 word annotated bibliography was also produced. An informed group of 15 practitioners and academics reviewed the authors’ initial findings at a knowledge exchange colloquium and advised on further investigation. Some of the gaps in research identified are: an authoritative history, an examination of repertoire, the relationship with other music (practice), the freelance practitioner career, evidence of impact and value, the potential for a pedagogy. [Executive summary]

This report by George McKay and Ben Higham is entitled Commmunity Music: History and Current Practice, Its Constructions of ‘Community’, Digital Turns and Future Soundings. It was funded by the Arts & Humanities Research Council with a grant of £26,733, and is the key output of a research scoping review exercise about community music, one of around 40 such exercises commissioned by the UK research councils in 2011 as part of their new cross-disciplinary Connected Communities programme. The purpose of these reviews is to scope current writing in the field, and identify areas for future research funding, to help shape the programme’s agenda. The report was written as follows. 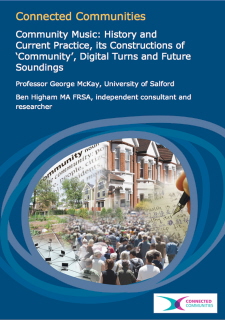 1.1. An annotated bibliography of 90 entries and 22,000 words was produced by McKay and Higham. This was used to scope the research field and to shape the report. Broadly, and with some overlap, McKay was responsible for critical and theoretical texts, Higham for policy and ‘grey’ literature, and both worked on the practice or repertoire side of the topic’s writings. The bibliography is freely available here, and elsewhere.

1.2. A paper on community music’s partial origins in the UK in the free improvisation movement of the 1960s and 1970s was presented by McKay at the Rhythm Changes: Jazz and National Identities conference, Amsterdam Conservatory, in September 2011. Title: ‘Community music, unorthodox music education and improvisation in Britain’. A podcast of the paper being delivered is available here.

1.3. A colloquium for around 15 ‘critical friends’, at which the project investigators presented their findings to date, was organised at the University of Salford in October 2011. This was a key moment in the review’s knowledge exchange agenda, at which leading academics and practitioners (some are both) in the field from across the UK came together to discuss the topic. The investigators sought delegates’ guidance on the adequacy of the range of research review, and on the quality and completeness of the findings. McKay and Higham also used the opportunity of the meeting to share community music and academic research practice, and to discuss future funding possibilities and other potential knowledge exchange collaborations. This was generally considered to be a vibrant and productive day. Further information about the day is available here.

1.4. The report was written by McKay and Higham. It is published by the AHRC, and on various relevant open access websites (including this website of course—just click report title above). It has also been published, at the journal editor’s suggestion, in the International Journal of Community Music (5:1, March 2012).