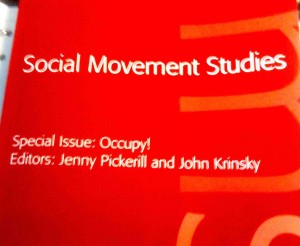 Just published is an outstanding special issue of Social Movement Studies: Journal of Social, Cultural & Political Protest, on the Occupy movement (vol. 11, nos. 3-4: August-November 2012). This is a journal I co-founded a decade ago, though I stepped down from being an editor three or four years back, making way for new ideas and energy.

The special issue is edited by Jenny Pickerill and John Krinsky, and contains 22 short articles from academics, activists, critics—precisely the kind of activist/academic intervention we envisaged when we set the journal up, though I’m pretty sure we didn’t manage it with quite this degree of success. From the editors’ introduction to the special issue, EIGHT reasons why Occupy matters to scholars, since ‘Occupy has enthused and mobilised activists in new ways and has articulated that inequality is something we all can, and should, seek to remedy’:

Pickerill and Krinsky go on to argue:

As Occupy activists are once more arrested trying to start another camp outside the London Stock Exchange and others concede to eviction notices (May 2012), it is timely to reflect on why the actions of Occupy activists across the world matter. This is especially so, given their comparatively short existence (since September 2011). There are obvious precursors and parallels to the Occupy movement (if it can even be conceived as such a connected entity), but it is not a clear progression from the anti-capitalist actions of the 1990s nor necessarily the spirit of the Arab Spring spreading west. There are disjunctures and fissures between these other movements and moments and the ways in which Occupy was conceived and practised. 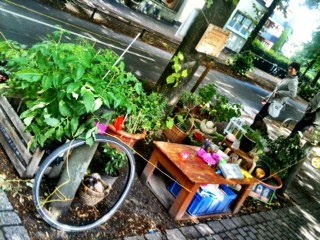 To many it was the moment when resistance to the inequalities of capitalism finally emerged: a tipping point in which the unfairness of bank bailouts juxtaposed against rising personal poverty triggered a moment of clarity of the absurdity of the current economic and political system. Yet we have had these moments of clarity before. Indeed, there are those who claim Occupy to be a manifestation of a particular ideology (and therefore its historical tenet) and there is evidence of certain tints of socialism, Marxism and anarchism at different Occupy protests (Graeber) and indeed similarity with the 17th century Diggers (Lewycka). Others rightly have despaired at the ignorance of lessons already learnt about the tyranny of structurelessness or the exclusionary potential of consensus decision-making practices (such as hand gestures).