The evening before the conference, most of us from across the Connected Communities programme met in a restaurant near Euston, where the talk and laughter and ideas at the dinner tables moved around utopia, our summer fair, elections and the political future, what are you doing over Xmas. Next morning, at the British Library, to open the day, community historian, activist, writer and publisher Alan Dearling took us on a trip around free cultural spaces and intentional communities internationally, focusing on gatherings drawing on traditions of festival and DIY culture—squats, travellers, techno sound systems, co-housing, and more. His own research and activism through writing, organisation and publishing is a contribution to a version of practical utopia, some of it drawing on reading science fiction texts.

In our panel on Utopia and wellbeing, we heard from Anne Rathbone, Mikey Reynolds and Ruth Mowbray about how ‘We are all teachers and learners together’ in Brighton-based co-production around resilience and learning disability (a term contested by the group involved). Resilience means better outcomes despite significant adversity, exploring the ‘everyday magic of ordinary human resources’ (Masten), while also recognising the need to challenge structural inequalities. Another key slogan of the group (‘we’ve got loads’) is ‘See the ability, not the disability’, and that situation would be a contribution to ‘our perfect world’. Eg on public transport ‘people wouldn’t rush you, the bus wouldn’t move off before you’ve sat down’, ‘people won’t stare at you or talk about you behind your back.’ Learning about resilience has helped members of the group to become more resilient. And in ‘our perfect world’ more research would be funded for co-produced activity with those facing the toughest challenges. The second presentation from Teri Howson (Bangor) and research artist Lisa Carter explored the impact of art on making life experience better for people with dementia (while acknowledging that in a utopian world there would actually be no dementia). For one person at a project workshop, dementia is ‘the bondage of the mind’, while art can ‘sever the ropes and release my mind.’ Each offered a modest, even fragile version of utopia: some shifts in everyday life that might improve the experiences and wellbeing of people involved. 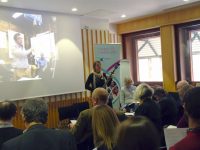 The Performing utopia panel told us (in English, Italian, and in song) about The Reasons, a ritual community performance/court/meal event imported from Sardinian tradition, aiming at a level of community conflict articulation and resolution (hence a better, possibly slightly utopian activity and solution). Mike Wilson and Antonia Liguori (Loughborough) and singer-songwriter Sharron Kraus performed (with banjo, right—other photos in the conference gallery) her ‘A river is a snake’ – and we all joined in during the song’s chorus. Then the GhostLab team (Geoff Bright, MMU, Sue Moffatt and Rachel Reddihough, New Vic Theatre, Max Munday, community broadcaster) told us about their performative ritual work with theatre, song and a kind of tarot—further singing from the back of the room added to the talk, theory, film, voice recording on offer. Then the singers came to the front, banners and all, a ghostly re-presentation of a working class movement and community of 30 years ago. Utopian memory and possibility of community that then sought to preserve coalfields but this year voted for Brexit. Social haunting, though, is not (just) history but it’s here and now: ‘there is a direct link between then and now’.

We shared lunch—more food and utopia link, as with The Reasons—with the Utopian picnic, a specially set table for 10-12 people, some of whom are artists and researchers, our guides to utopia and utopian conversation at the dinner table, to thinking about food, and others are from the conference floor. Emma Roe and Paul Hurley (Southampton), together with Tessa Tricks and Stine Wilhelmsen (Hubbub) prepared the table and led the conversation.

A packed afternoon began with set of presentations on the theme of Utopia, place, space—and we opened with thoughts from the Imagine project: ‘Utopia begins within yourself, [where there is] a life-giving resonance’. A visualisation, an object, a life-giving moment, wellbeing via the experience of resonance, and according to Yvonne Hall (Durham), ‘people get it, they find what they need’. Josh Cameron (Brighton) praised Connected Communities for its offering of bursaries and support for the attendance and contribution of community partners. The idea of belonging, the creation of belonging maps (sometimes collages of memory and desire), is not always positive but can be quite dark—but as Josh said, today’s about utopia so we’re accentuating the positive aspects. This included the creation of ‘self-soothing boxes’ (someone’s we saw contained Curly-Wurly bars), and talking about ‘self-stigma’, internalising blocks to recovery.

Utopia is a pejorative term used in the dismissive reading of the failed narrative of the development of the postwar council estate. Carenza Lewis, Ian Waites (both Lincoln) and Lucy Picksley (community engagement officer) uncovered for us the social project of the Middlefield estate, Gainsborough—from a kind of garden city. We should not follow the effort of many housing and policy historians to undermine the social housing policy of the times, the benefits of which might actually inform our quiet and relatively inactive debates about housing provision for all today. So: an archaeological dig on the open spaces of the estate, 20 1x1m pits, uncovering that indeed the area in fact has ‘time depth’, finds dating from 17th and 18th centuries, as well as much data from 20th century, primarily children’s artefacts (including a Curly-Wurly bar wrapper—there’s a theme here!), suggesting that as a children’s open play space Middlefield has functioned very well.

The next panel was Utopia, Movement and Tradition. Graeme Evans (Middlesex) discussed research on the re-use of cultural heritage in two London buildings, Hornsey Town Hall (1933) and an 18th c mill in Bow, East London, their redundancy and sense of being liabilities rather than community assets, and attempts by community to adapt and re-use the spaces. He reminded us of the Foucauldian shift out of the utopia/dystopia binary to the heterotopian. Working with his university’s architecture students they staged a speculative exhibition on how we could re-use these spaces (2,000 visitors over the ten days), the possibilities and limits of utopia, the practical and fun elements of re-viewing the buildings. The local council’s preferred redevelopment of this civic building is as a 50-room boutique hotel—precisely what the local community did not express a desire for during the exhibition. The co-production element of the waterside mill re-use included prototyping water turbines (or wheels, which would also help to re-oxygenate the River Lea) for local power generation. Now a local group of older men, The Geezers, are actually making the wheels using their industrial skills. Next May the project will be launched.

Then Samuel McKay (PhD student, Leeds, and community arts/performance worker) discussed ‘Welcome’ in the context of refugee communities, alongside art from Faceless Arts (Wakefield), working with migrant and asylum-seeker communities. Our languages may differ (not least as English language education for new groups is reduced or removed), but via artistic creativity under a theme we can cross-dialogue. ‘How do we want to be welcomed in a perfect world?’ Welcome viewed as a better response to immigration than deterrence or stigma, say. But, he concluded, questioningly, are good intentions adequate for community arts practice? In his view, as a methodological point, co-production is a way of moving away from or beyond the limits of good intentions.

In our session on Utopia and culture/creativity we were introduced to play and community. Another adventure playground, this time in Sheffield, down the street from some of our researchers, artists and community workers (Steve Pool, Patrick Meleady, with Kate Pahl). Altogether nearer to home. In a short film made for the day, folk musician and friend of Connected Communities Nancy Kerr told us that ‘All the best utopias have a slide.’ We laughed. I tweeted it. We watched João Paulo Simões’s (Frontier Media) video for Kerr’s new single, the singer engaged in a simple repeated gesture of human embrace with passers-by in the street. Then we watched some of the AHRC Research in Film Award-winning film about recovery, addiction and mental health, Wonderland (Amanda Ravetz, MMU—the film won in this year’s special Utopia category), and heard from Michaela Jones and Mark Brest of their thoughts about recovery and trying to make a better future. 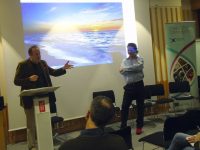 We ended the day in a session called Utopia, religion, theory. This opened with an intriguing dialogue, right, between Ernst Bloch (aka Johan Siebers) and streetwise youth (aka Marcus), which included us being invited to share a few minutes of silence while we each thought about a moment of vision or positivity or possibility from our own experience. Sounds woolly, worked wonderfully. Finally what turned out to be reflections on the day by utopian scholar David Bell (Newcastle), alongside a critique of the limitations of utopia as we had been using it. And yet, it seems to be a useful term in wider public discourse, useful for thinking about, even trying, different ways of being and living together. At the British Library in December, we thought and spoke about Utopia 501, we looked back on utopia, community and culture, in a very packed day of ideas and shows. I thought at the end, What a productive day we have had, one day in the 500-year life of Utopia.