I review for the Times Higher, short ones really, in its ‘What are you reading?’ column, of books I am (re)reading or that have caught my eye. Here’s the latest, from this week’s edition. I like supporting and championing new work, and I enjoy the small challenge of reviewing in 60 words max. 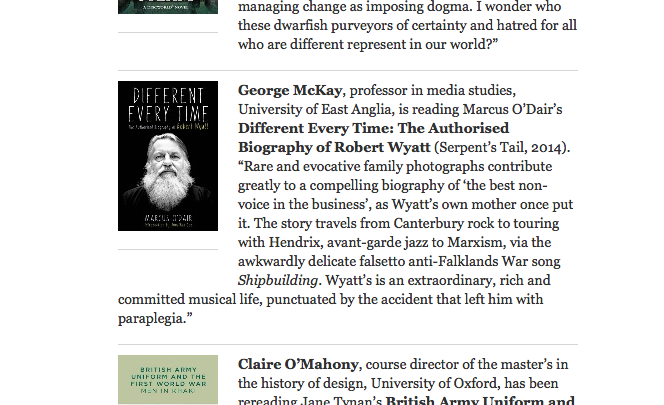 If he sang from a wheelchair, it wouldn’t be the same…. Who’s going to be the next Teddy Pendergrass?—Music journalist Dennis Hunt, 1982

Now what about this for a comeback gig, your first public vocal performance since a serious car accident put you in a wheelchair, with paraplegia, three years earlier: Live Aid, 1985. Still, at least it was your home town crowd (of 90,000, in Philadelphia; plus the watching global multi-millions on television). That was a big thing to do. It still blows my mind when I think of it, the sheer bravado. And that combined with so almost being overwhelmed by the emotion of it when you roll on stage … a fantastically powerful and moving performance by Teddy Pendergrass.

Pendergrass remembers how his ‘spirit collapsed’ on reading those words: ‘If I sang from a wheelchair, it “wouldn’t be the same”. What the hell did that mean? I was stunned, enraged, hurt, devastated. To say this added insult to injury—literally—doesn’t even start to describe how diminished, worthless, and inhuman those words made me feel’. Pendergrass was able to draw some strength in transition from other disabled black male musicians, including Johnnie Wilder of 1970s disco band Heatwave, himself a man with quadriplegia following a 1979 car accident. It was important for Pendergrass to see that, ‘[d]espite what had happened to him,… Johnnie had continued to write and record his music’, not least because there were those in the music press doubting precisely that Pendergrass would himself be capable of carrying on.  In due course Stevie Wonder suggested to Pendergrass the title of a new album, but more, too: ‘I also found talking to Stevie inspiring in a way I didn’t appreciate as much before my accident. In addition to everything else we had in common, there was now a disability. Only he, Johnnie Wilder, and a few other people could understand the challenge of appearing and sounding confident when in fact you feel vulnerable, even helpless’….

It was really an astonishingly brave return to live singing, as he said in a later television interview, the big smile on his face an acknowledgement of the retrospective realisation of the size of the challenge he had set himself: ‘in front of ninety thousand people, and millions of people around the world, I decided to find out what was going to happen’, that is, what sort of reaction he would now elicit from a live audience, and even whether he could actually sing again professionally. He was anxious about the audience perception of the before-and-afterness of it all, and about the vocal and physical performance: ‘Would an audience hear and see me, Teddy Pendergrass the singer, or would they see that poor disabled guy who used to be Teddy Pendergrass? I played out every imaginable scenario, from my being unable to control my chair to missing notes’….

The Live Aid film of Pendergrass’s single song that momentous day (above. Watch it), the 1970 Diana Ross hit ballad ‘Reach out and touch (somebody’s hand)’, with the song’s writers Nick Ashford and Valerie Simpson, is rather moving, because Pendergrass himself is clearly so very moved to be onstage in front of an audience. In fact, after his reception by the crowd as he has carefully manoeuvred himself in his powered wheelchair to his mark on the stage, he quietly cries centre-stage before he begins to sing. The film footage shows an aerial shot of the massive stadium crowd, and then focuses one of the large stadium screens in close-up on Pendergrass’s face as he wipes away the tears and the crowd erupts. The band vamps for a short while as Pendergrass composes himself. When he says to the audience, ‘I want you to know I feel your love’, it sounds not like a crowd-pleasing showbiz statement but a heartfelt recognition of support and validation: pop helping its own. The first note he sings is a little flat, and elicits a grimace from Pendergrass, but he soon tunes in. The choice of song resonated doubly: it was ‘the right message for the event, and the right message for me’.