Does punk rock in disability culture matter? Does punk matter (any more, decades later)? Curiously, I think, it has begun to speak more to me in my fifties than at any other time since my contumacious teens in the late 1970s. My view is that this new meaningfulness has a good deal to do with (my) disability—as I aged, I looked for a culture that would help me understand, embrace, maybe even emblazon my own body thing, as my condition—progressive muscular dystrophy—deteriorated, and I found one in, of all places, the memory of that mad music and mismovement of my own youth.

Punk has indeed spoken to people with disabilities, and been able to do so across several generations of fans and musicians now, in its various “afterlives”. Both punk’s “aesthetic of anger” (as influential anarcho-punk band Crass put it) and its accessibility have been useful in the disability movement’s cultural repertoire of contention, and timely for the new kinds of radicals coming along who wanted a street confrontation in which the rallying cry PISS ON PITY was a key communication in the struggle for rights and independence. Colin Cameron outlines the significance of both the aesthetics and the locations of specific popular music genres within the disability arts movement of the 1980s and 1990s.

Blues is music born of oppression and which give voice to the oppressed. Folk emerges from a rootedness and groundedness that is certain of its own values. Punk is the noise of the alienated, the disregarded and the disrespected. Each of these forms is used to articulate anger at the established order…. The power of the music discussed here is also entwined with the community and grassroots locations in which it has been performed…—arts centres,… day centres,… residential homes: most importantly, in any place where disabled people have been able to get to.

What else might be or have been attractive in punk for later generations of crips? William Peace, who maintains a blog titled Bad Cripple, has written about the influence of punk on him, even though he was in fact not even a member of the subculture. But, vitally, punk’s initial explosion was contiguous with him becoming disabled:

I do not like Punk music … [but t]he sort of anarchistic nihilism the punks fostered suited my mood circa 1978 … [when] I was newly disabled…. What I directly related to was the punk motto [from the Sex Pistols] “no future.” This is exactly what I was thinking and worrying about: did I have a future as a crippled man?

One of the (younger) commentators to Peace’s blog explained the contemporary significance of punk for him: “I’m 33 and have a disability myself. I still identify with Punk music and this article definitely made me realize why the lyrics of, not only The Sex Pistols, but many other Punk bands like Lagwagon and NOFX still ring true for me. For me, it feels like I can’t fit into society the way I’m supposed to fit in and the music lets me identify’”. Once more, punk is understood and consumed by a disabled fan as a musical expression of alienation and dysfunction.

In media and performance, too, punk continues to resonate relevantly, with a recent spate of films and productions about punk and disability providing further evidence of the subculture’s ongoing capacity to engage. So, argues David Church, “[d]espite punk’s steady mainstreaming over those same decades [since the 1970s]—achieved precisely through popular media like film—a rebellious sense of social deviance has remained a central subcultural ideology, rooted in punk’s loud and disorderly musicality”. Films include the relatively high profile posthumous biopics of the original punk generation stars, Ian Curtis (Control) and Ian Dury (Sex & Drugs & Rock & Roll), each of which places the singer’s disability as a central component of his work and life. Britain’s leading disabled performance group, Graeae Theatre Company, produced in 2010 and then revived in 2012 for a national tour a stage musical based on the songs of Ian Dury, entitled Reasons to be Cheerful.

Such films and performances were not (just) opportunities for older audiences to nostalgize, but also presentations of now historic disability music and attitude in social struggle, as well as popular—as opposed to, say, academic—efforts at revisiting punk as crip culture.

Alongside these have been film documentaries of more minor, contemporary punk bands. Heavy Load was an integrated learning disabled and non-disabled punk band from Brighton, formed originally in 1996, who were featured in the 2008 film, Heavy Load, which documented the band’s efforts to break out of disability centre shows into the larger mainstream concert network. Why punk, for Heavy Load? In part because the Sex Pistols had originally sung of how people “made you a moron”, of how you were “pretty vacant”, and such lyrics meant something to that band of learning disabled people and workers. Intriguingly, a second documentary film about a newer generation of disabled punks follows a similar trajectory of the trials, tribulations, and triumphs of trying to make it in a band, touring, arguing, playing live. 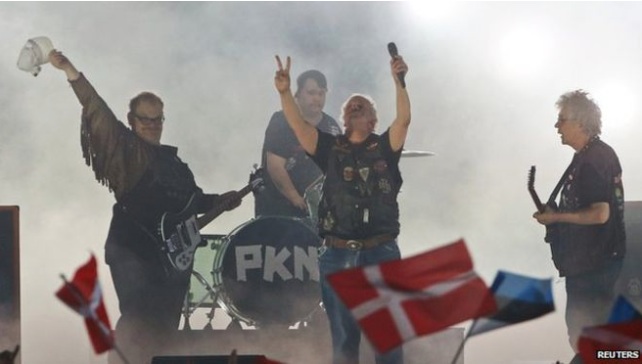 The subject of The Punk Syndrome is the Finnish punk band Pertti Kurikan Nimipäivät (shortened recently to the nearly anagrammatical PKN), all of whose members have some kind of intellectual impairment. Singer Kari Aalto explains: “This film tells about the band … so it’s about one retard who sings punk and three retards who play punk”. In the context of such punk disability bands as Heavy Load and PKN—Eurovision Song 2015 semi-finalists (semi-? What’s that about, then, viewers and juries? Are you really expecting us to believe there are ten better acts than PKN?), it is possible to make the point that, as Calvert says, “what takes place on stage presents a potential model for social development offstage,” and that this model is mediated more widely via film than simply live performance.

I do not think that, in this brief survey of cultural moments in punk that took place up to thirty-five years after its heyday, I am simply reintroducing a sort of “heroic” version of subculture theory, in which the critical oppositionality or “resistance” of a subculture is just remolded into the shape of a supercrip with a Mohican / Mohawk haircut, a ripped t-shirt, or a set of wheels. Do you?

[extract from my forthcoming essay ‘Punk rock and disability: cropping subculture’, in The Oxford Handbook of Popular Music and Disability]