George McKay is Professor of Cultural Studies at the University of Salford, where he is Director of the Communication, Cultural & Media Studies Research Centre.

In 2011 George is going to be Professor in Residence at Kendal Calling. He has written extensively about pop festivals over the years, from his earliest work in 1996, Senseless Acts of Beauty, which explored the free festival movement, to the first cultural history of Glastonbury Festival in 2000. He is currently working on a new collection about festival culture, probably to be called Carnivalising Pop.

Ben Robinson, one of the festival organisers, says:

George is joining us at Kendal Calling this year as our Professor in Residence. We think that makes George’s role a first for any festival anywhere—we are the only festival with its own in-house professor. What it means is that George will be giving two short illustrated lectures on our Soapbox stage, introducing topics from his own work he thinks will be of interest to a festival audience, followed by a Q&A session. We’re hoping we can get him to do a discussion with one or two of the musicians appearing as well, about politics and pop.

George explains what he thinks about his role at Kendal Calling:

For me being Professor in Residence is a terrific opportunity to take material out to a different audience and in a different kind of setting. I did a public lecture last year in Bristol for a group of new travellers and free party people—it was part of the Economic & Social Research Council’s Festival of Science, in fact—using a mic and standing next to an almighty sound system. They seemed to enjoy it (I enjoyed it), and asked me lots of well-informed questions, some critical, some very supportive. Great! I came away really buzzing, and just wondering, Why do lectures have to be in lecture theatres? And where else can I do public engagement?

The other thing is, I am working on a new 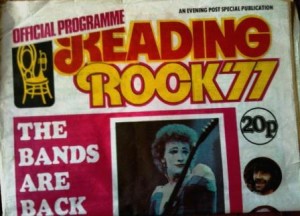 book about festivals at the moment, called Carnivalising Pop, so, yes, when you see me watching a band or in the beer tent at Kendal Calling I am actually researching, you know! And I’ve been going to pop and rock festivals since I was 16–that’s nearly 35 years of festival memory…

Professor McKay is appearing on the Soapbox stage, and here are the times and subjects.

‘Crippled with nerves’: freaks & punks & disabled pop stars. Hank Williams, Stevie Wonder, Curtis Mayfield, Ian Dury, Joni Mitchell, Ian Curtis, Neil Young … What are their songs of disability? How do you sing or dance about having polio, or epilepsy, or how can you sing when you can barely even breathe? Music like Young’s ‘Helpless’ (1970), Dury’s ‘Spasticus Autisticus’ (1981) or Mayfield’s New World Order (1996) show pop and rock taking on unlikely subjects brilliantly, and the musicians drawing on their personal experiences. This research project funded by the Arts & Humanities Research Council.

Radical gardens: from flower power to guerrilla gardening. George shows how a garden or a flower of all things has been used for campaigning, to make utopia, or by the Nazis, or against war, or for empire. Allotments against capitalism, the red remembrance poppy vs. the white peace poppy, the concentration camp herb garden, the peace garden, the early 20th century Garden City ‘cranks’—these are all features of an alternative and thought-provoking take on everyday garden history. George McKay’s Radical Gardening—‘a truly important book’ (Times Higher Education, July 2011)