A journalist from a national newspaper contacted me last week, for my views on recent protests. We then had an email exchange, in which I responded to his further prompts. I wonder what, if any, will be used:

Thanks–would be good to get your views on UK Uncut. The tax system as a focus of political activism isn’t in itself new of course: from the Chartists in the 1830s on the tactic of tax refusal has been of interest to protestors, not least because–in theory, if enough people do it–it hits the state directly in its pockets. In the peace movement too at various times people have practised a form of civil disobedience by witholding the percentage of their tax they calculate as being spent by the government to support the military. The anti-Poll Tax campaigners of the early 1990s often referenced as far back as the Peasants’ Revolt of 1381 to show a radical tradition of anti-tax resistance. And the car lobby’s extraordinarily successful coming together a few years ago to bring the country to a standstill by blockading petrol stations and distribution depots was largely a reaction to what its campaigners viewed as excessive fuel tax.

Nonetheless UK Uncut is a fascinating development–not about tax refusal or resistance as many previous tax-centred protests such as those above, but public activism in order to get other people to pay more tax.

Also the fact that the chosen space of the UK Uncut protest is the shop itself–not in the street, or a march winding up at a public park for a rally, say–but within the shop, is important. There is an effort to blockade, to obstruct, a normal everyday place where financial exchange and profit-making happens: in the 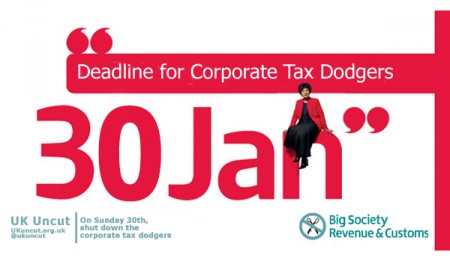 shop. Our national leisure activity and even our sense of national identity (‘a nation of shopkeepers’) is nudged, ever so slightly. Fascinating. I’m not sure how anti-consumerist this is–it’s not a ‘Buy Nothing Day’-style campaign as a radical critique of consumption. And yet in another way it does strike at the very transactional heart of capital, at the micro-moment when money changes hands.  Because it’s about the international tax avoidance strategies of major companies, and what is seen as their over-cosy relationship with government and HM Revenue, the campaign aims to widen its target too: national government cuts, transnational capital business arrangements.

–Are we at a tipping point regarding levels of anger and discontent among Britons that could see a return to violent protest on a scale not seen since 19xx? Hmm. There is ‘violence’ (your word) and ‘violence’ in politics–a short urban riot, possibly even one that seems to be encouraged by some controversial police crowd control methods, is hugely different to, say, the use of the bullet in Northern Ireland–but in recent decades each has been a form of violent protest. We need to be careful in our terminology here [and aware of distinctions]. But I do acknowledge the extraordinary event of a member of the royal family being assaulted in a demonstration–that story shot around the world’s media as a microcosm of the current state of turmoil in British society. Does that mean Class War and Bash the Rich events are going to make a comeback, as in the Thatcher years? We have already seen reporting of radicals organising protests against the forthcoming royal wedding.  At the same time,…  as the peace activist whispering in my ear has just pointed out, the greatest violence Britons are involved in currently is a state-sanctioned war.

But there could be an alternative coalition which organises itself to harness the discontent and anger–across the public services, trade unions, students and schoolchildren, the disabled, all the kinds of groups feeling targetted by government policies. As one tweet put it on UK Uncut’s website today: ‘Only 7 weeks to mobilise 1 million united people onto the street[s] of London on March 26th’.

—What’s your greatest concern about all this? My concern is that the campaign as it develops, and assuming it expands,  will not be listened to by the government–a  little like when one million people marched through London against the war in the biggest street protest ever in Britain, and the government ignored them. That’s a real danger for democracy as a general system because democracy is refreshed and revitalised by protest, a government is kept on its toes by people on the streets. And there is a tremendous groundswell of interest in politics which at the moment no established political party seems capable of harnessing. While we regularly bemoan the public’s apathy towards politics, here is in fact a wide-ranging set of groups and campaigns with energy and drive, many of whom might never have been involved before. For the political process, its discourses and actions, that ought to be a positive situation.