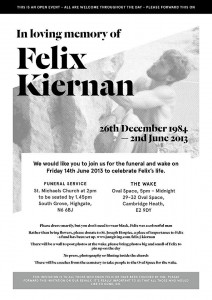 In early 1985 Emma and I lived in a squat near the west end of London, the top floor apartment of a large Georgian house on Gower Street. I worked as a sort of painter and decorator in Camden, and she was at the cafe at the ICA. Her sister, Sarah, and Sarah’s husband Patrick, had just had their first children, twin boys—a double handful! As a treat for us, and to give their mum and dad a rest,  Emma and me would sometimes take the babies Felix and Miles out in the pram for a walk around Camden, the busy streets round the market and shops. Well, we were always being stopped by passers-by, who wanted to see these beautiful twins, to gaze at them and enjoy their presence in the world. We were frequently told, with real joy in the moment, how lucky we were to have such children. At first we would say, Oh actually they’re not ours, they’re my sister’s, we’re just looking after them for a break, but this explanation was met with disappointment (and also we were instantly diminished in the eyes of the passers-by). So later we would just say Oh thank you, yes aren’t they lovely, that’s very kind, yes we are blessed. We were glorious in their company, as we pushed along. What a gift those baby boys could give. Felix, meaning happy, and a name that’s ending with a kiss.