Because of protest the anarchist is in the news again, but usually with some puzzlement on the part of journalists, other protestors, the wider public. So here is a short typology of the modern (British and European) anarchist, in no particular order (weak joke) except roughly chronological, through and beyond the 20th century. 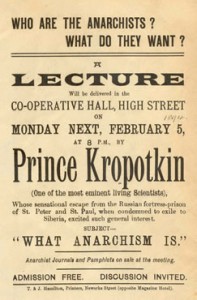 I recognise that there are flaws in this kind of simple writing and categorisation, including:  exclusivity or partiality (perhaps not all important types included); individualisation (anarchists tend to be movement and organisation people rather than solo); reduction (anarchists are more fluid than this typology of political beliefs admits, more capable of moving across identity and position–it’s one benefit of an incomplete ideology, after all). A further weakness is that many anarchists are unspectacular souls who may be quietly active in particular social and political fields (like co-housing, grassroots, co-operative or DIY organisation, the peace movement, community gardening, web or publishing, animal rights, etc etc) and precisely do not present in convenient, identifiable groups. But these may be issues more for the converted than the curious. Do let me know (politely, please). 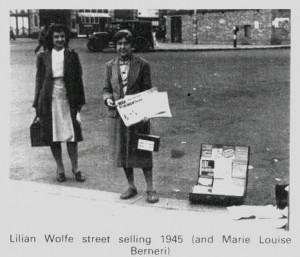 The Freedom writer/reader. Freedom is a London-based anarchist newspaper and press, founded in the late 19th century by anarchist thinkers including the exiled Peter Kropotkin. It’s still going, and forms probably the leading strand in Britain  of traditional anarchist intellectual ideas and curiosity. 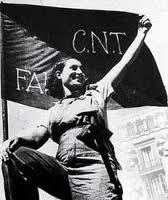 The anarcho-syndicalist. The working-class trades union oriented wing of anarchism, centred on workplace organisation and mutual ownership. See the Spanish anarchist trade union the CNT, particularly during the 1930s in the Spanish Civil War.

art, media, politics, theory. Involved in les evenements of May 1968, Paris, students and workers uniting in a liberatory burst. Resonant slogans include ‘Be reasonable—demand the impossible’, ‘Underneath the paving stones, the beach’. Revived interest in 1990s London, with Situ-inspired environmental art-activists Reclaim the Streets.

… and the Provo. Dutch (1965-67–from ‘provocation’) example of the counterculture’s stuntsters—heavily involved in reimagining the city (their ‘white bicycle’ scheme in Amsterdam was one of their ‘white plans’, a free transport network, supplying initially 50 white bikes for free use by anyone). Later provo-style activists central to the city’s squatting and alternative movement.

The ‘terrorist’. There is a historical tradition within anarchism of political violence, including armed struggle and assassination—what anarchists used to call ‘propaganda of the deed’ (as opposed to the word). Here the masked figure of the 19th century anarchist bomber casts a long shadow. In Europe in the 1960s and 1970s various armed groups formed by mostly young activists—the Red Brigades, the Red Army Faction, Baader-

Meinhof Group.… In Britain in the early 1970s the Angry Brigade uses bombs, guns and communiqués to attack symbolic property. As they put it then,  ‘the war will be won by the organised working class, with bombs’ (Communiqué 5, c. 1970).

The anarcho-punk. A cultural position from the 1970s and 1980s, less oriented on the Sex Pistols (famous in part for their first single, ‘Anarchy in the UK’) than for the post-punk grassroots movement spearheaded by bands / collectives like Crass and Poison Girls.  Combined, not always comfortably or convincingly, punk rock music and attitude with a love/peace and powerfully anti-war message.

The Class War fighter. A product of the polarised society of Thatcherism? Antagonistic 1980s working-class political activist, usually a bloke. Favoured early activity: the organisation of ‘Bash the Rich’ events, a group turning up at social event of the privileged few—say, somewhere like Henley Regatta—to cause mayhem and

confrontation, as a deliberately ugly reminder of class inequality. According to Class War’s 1992 book Unfinished Business, ‘We know only too well that revolution means civil war. If you are looking for Mickey Mouse politics you had better go elsewhere’. 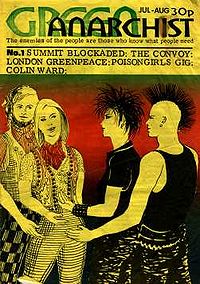 Green Anarchist. Magazine and group of radical environmental wing of anarchism, sometimes espousing a deep green, at other times a primitivist worldview. Active in the 1980s and 1990s, contributing to and energised  by the anti-road campaigns of the time. One of their slogans: ‘For the Destruction of Civilisation!’ 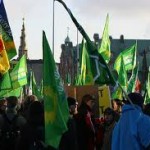 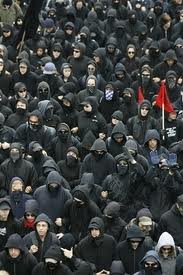 Black Bloc or Green Bloc. 2000s anti-capitalist demonstrator—with either a militant and confrontational (BB; see also Class War above) or an altogether less aggressive environmental (GB) perspective. More a tactic for a demonstration than an organisational group.