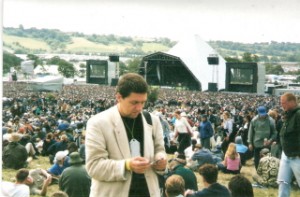 As UK Uncut prepare to protest against headliners U2, and Michael Eavis proclaims the return of politics to this year’s festival, I thought it would be interesting to revisit some of the origins of the politics and campaigning of Glastonbury Festival, as extracted from my 2000 book Glastonbury: A Very English Fair:

The hot political campaigns of the times filter down to the festival, which expresses its sympathy by sharing its space, as for instance with the noticeable number of miners’ helmets on site in 1984 at the height of the Miners’ Strike, or the march around the site by protesters against the still extraordinary anti-rave clauses of the Criminal Justice and Public Order Act, 1994. It is in the extra-parliamentary arena that the Glastonbury political ethos is most keenly felt, though. The politics of the festival are a central issue in its identity because they contribute to its continuing ethic, its idealistic sheen, of course. More problematically, as the event has become larger, more commercialised, altogether more expensive particularly in the 1990s, the notion that the festival maintains some kind of radical edge must be looked at. In this chapter I look at the main political campaigns which the festival has been involved in, in terms of both on-site activity and in its fund-raising capacity, while in the following chapter I consider questions about the commodification of the festival, the way that it has frequently been accused of losing its roots, of becoming ‘yuppified’.

The main political focus for funds at Glastonbury started as the peace movement, and later embraced environmental campaigning more widely. 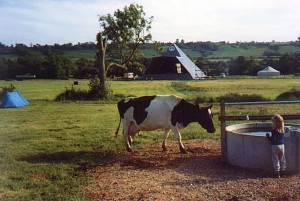 In this context, the long-term relationships have been with the Campaign for Nuclear Disarmament (CND; 1981-1990), Greenpeace (1992 onwards), and Oxfam (because of its campaigning against the arms trade), as well as the establishment of the Green Fields as a regular and expanding eco-feature of the festival (from 1984 on). The radical peace movement and the rise of the greens in Britain are interwoven at Glastonbury. The festival has offered these campaigns and groups space on-site to publicise and disseminate their ideas, and it has ploughed large sums of money from the festival profits into them, as well as other causes….

June 1981 saw the first Glastonbury CND Festival, the first time CND was involved. The formation of Mid-Somerset CND early in 1981 had sparked greater interest locally. But what were relations with CND like? How much persuading did CND take, to become involved with an event which had happened only once before as a major commercial event (and lost money)? Old hippie stalwarts like Ginger Baker, Gong, Hawkwind played—as well as newer acts like Aswad, New Order, John Cooper Clarke. Speakers included E.P. Thompson. Worthy Farm put up the money, booked the acts, organized the actual event, while National CND handled publicity and sold tickets. The pyramid stage returned, this time as a permanent structure, with planning permission for use as a cow shed when not the festival stage each summer. (Many peace activists have enjoyed the irony that the metal sheeting used for the pyramid was army surplus material.) I have seen figures ranging from 12,000 to 18,000 people attending, with £20,000 raised for CND. The following summer, 1982, in spite of awful weather, the numbers doubled. Like alternative comedy perhaps, or the New Traveller movement up to 1985, Glastonbury would begin to be recognised as one of those cultural phenomena working, and significantly thriving, against the dominant individualist, right wing, pro-nuclear ideology of Thatcherism.

In retrospect, what strikes as extraordinary about the connection between Glastonbury Festival and CND in 1981 is that it happened at all. At first glance it is a most unlikely alliance: a campaign organisation with an international profile, built on a sense of moral authority, lends its name, its reputation, and not least its organisational facilities in London, to a West Country 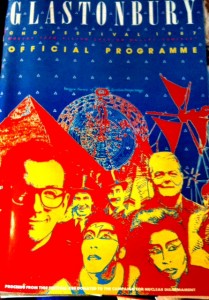 farmer whose track record in putting on festivals is patchy at best. Recall that in 1981 the festival had only ever taken place three times before, spread over the previous decade (1970, 1971 and 1979), once as a local fair, once as a free event, and, most recently, losing sums of money for the organisers. This would hardly appear to be most promising way of raising funds for a campaign which had itself been through the doldrums for much of the seventies. But CND was up for a revival in the 1980s, thanks to a cluster of MAD (Mutually Assured Destruction—with acronyms like that, no wonder everyone was paranoid) personalities and policies: Thatcher and Reagan, US-controlled Cruise missiles being sited on European air bases such as in Germany, Holland, Britain, the peace protest against the Falklands War in 1982.

As well as national demonstrations and carnivals and the (apparent) support of some politicians on the parliamentary left, there were more interesting symptoms of resistance against nuclear weapons all over the country. Best known of course is the grassroots activism of peace campers at Greenham Common and many other air bases (102 in all in November 1982), and still least known is the decentralized cultural pacifism of the spectacularly successful anarchopunk scene. Glastonbury Festival became another highly visible, and a profitable, focus of opposition to nuclear weaponry—and it’s significant that all three examples cited, camps, anarchopunk, and festival, are both cultural manifestations of protest and regional, frequently rural ones….