Here are events associated with the new book. I’m happy to talk about it and my festivals research from the past two decades to academic and general audiences, to media, at festivals…. Do get in touch (contact).

I am chairing an afternoon panel discussion on the place and significance of festivals in today’s cultural landscape. Further information to follow.

I am co-curating and chairing a panel about research into music festivals, with academic researchers and festival directors speaking. This is part of a series on the theme of Decades, part of the 10th anniversary celebrations at this year’s festival. Looking forward to it; a beautiful setting in the English Lake District. 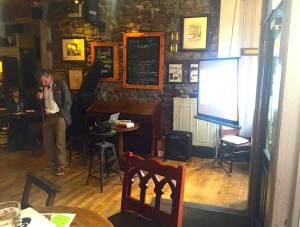 A public lecture in a public house: speaking about festivals at The Robert Gillow, Lancaster, June 2015

Festivals of Britain. In the week of Glastonbury Festival, come and find out about the significance of pop festival culture in Britain. Drawing on his new international collection The Pop Festival: History, Music, Media, Culture (Bloomsbury), George McKay, Professor of Media Studies at University of East Anglia, discusses counterculture, commerce, utopia, green issues, mud and the earth, a pyramid and a stone circle, a multi-platform media mega-event, the genius loci, and possibly some music … the pop festival.

I organised this one-day event featuring four academic researchers, three festival directors, two archives and one Director of BBC Music, to reflect on BBC Radio 1’s Big Weekend festival that took place in Norwich round then, as well as on events like the annual Norfolk and Norwich Festival which was also happening then in the city. From the publicity:
To mark and to critically interrogate the correspondence of these occasions, an academic and industry symposium is being held at the UEA. It will feature academic speakers from media studies and popular msic studies, from industry, from the media, and from festival organisations. Speakers and features already confirmed: