Yes, a short ‘narrative prosthesis’. Or, my autopathography, in 800 words. I was born in Glasgow at the start of the ’60s, at home in the kitchen of our Cowcaddens apartment, in fact. As a wee boy in Scotland, I was in hospital for muscle-stretching treatment on my lower limbs, including a period in a residential children’s hospital outside Glasgow called Mearnskirk. This was because I had poor balance and seemed to walk permanently on my toes. Here I stayed in the polio ward, 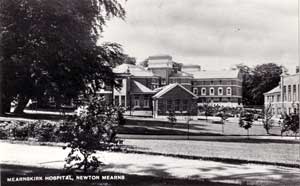 where my bed was at the far end near the windows, past the boys lying in their iron lungs to aid breathing. My mother used to drive out and see me every day. My father actually bought me a present, and I’m told it was the first time he’d done that unprompted. I saw Celtic winning the 1967 European Cup on television in there. I remember I was put in full leg plaster casts for months at home too in the hope that my muscles would stretch and I would be able to walk normally. A more experimental surgical treatment was discussed but my mum said no. The Cowcaddens was mostly demolished in the 1960s slum clearances (well, and to make way for an urban motorway) and we were moved to a council flat in one of the new tower blocks in Maryhill. Most of the wider family were moved to Easterhouse.

At aged 13-14, in England, I had follow-up tests at Addenbrooke’s in Cambridge and the Jenny Lind Children’s Hospital in Norwich. I strongly remember being forbidden to wear platform shoes (this was the early 1970s. Crushed). Curiously, I was never really definitively diagnosed at age 6-7 or at 13-14. (In the 2000s my Aberdonian consultant Prof Mitchell was most puzzled that I’d never been given nerve conduction tests as a child or youth in Scotland or England.) A few years later, as a punk rocker, it was actually quite an asset to have an unusual gait.

Then I was 40, tripping up a lot (every day), finding myself having real difficulties doing my children’s buttons up. My handwriting—never an asset or beauty—seemed less legible to my students, though I could usually still read it. Chatting to one of them after a class, a quite disabled guy in his 30s (something neurological and terminal, he told us), I was completely floored by him asking me what I had. I really panicked after that seminar, and couldn’t get out of my mind the look of puzzlement on his face. A while later I actually realised my lower limbs didn’t seem to be doing what I expected any longer, and I couldn’t even lift my feet. I saw my GP, who examined the palms of my hands and fingers as well, and asked how long they had been like that. I actually did reply ‘Like what?’ in an absurd confirmation of masculine lack of self-knowledge; I saw the blood rise up his neck and face.

Off to the neuromuscular consultant, and a set of nerve conduction and other tests. Anyway, muscular dystrophy it used to be categorised as. Charcot-Marie-Tooth Disease is my condition’s exotic and historic name (yes, that Charcot). Hereditary motor and sensory neuropathy (attenuated muscularity of lower legs and hands/forearms); I’m a classic case. It’s an incurable progressive muscle-wasting condition, which I tend not often to describe it as, since that is usually a bit of a downer in conversation. But let’s not overstate it: there are worse and nastier conditions in the neurosphere, and mine, CMT, isn’t life-threatening. Something like 23,000 people in the UK have it.

Around the time of my diagnosis—it’s fair to say, yes, that was a bit of a personal crisis period—I was at Glastonbury Festival in June 2000, publicing my latest book. I noticed that Ian Dury & the Blockheads were due to play, and went off to see them. I’d seen that very band many times in the past, including in 1977 on the Stiffs package tour, with Wreckless Eric and Elvis Costello, and when Wilko Johnson became a Blockhead in 1981 too. I didn’t realise why I wanted to renew the acquaintance, beyond that I thought it might be fun.  Alas Dury wasn’t able to play at Glastonbury that day, being too ill with cancer.

But he was in my head again, that ‘raspberry ripple’, that  ‘flaw of the jungle’, and just when I needed him. How very  considerate. I began to think about the disabled body in pop and rock, and read around on it. Fortunately there wasn’t at that time that much to read—an excellent situation for a writer looking for a topic or a diversion, seeking some ‘knowledge of selfhood and body-truth’, as Petra Kuppers has put it…. The journey to that knowledge for me started in the Glasgow polio ward in the 1960s and the punk rock scene of the 1970s. From it has come quite a lot of work on polio and pop, an AHRC research project called ‘Spasticus’ (after the Dury song, of course), a book called Shakin’ All Over, focused pieces of writing on punk and disability, on jazz and disability. Applied deconstruction, someone said.

2 replies on “A short ‘narrative prosthesis’”

Thank you so much for coming to the Freie GartenAkademie lecture in the wonderful allotments in Munster on Saturday. *And* through the rain! I had a lovely tour round some Munster gardens on Sunday morning with Wilm Weppelmann–the Occupy garden in ‘Occupy-Platz’ (thank you, Joshua), Wilm’s embryonic Hunger Garden project, the Ian Hamilton Finlay piece up a tree in the park, some guerrilla gardens too. I hope you enjoy Radical Gardening–do let me know. I want to return to the case of Humphry Repton, the 18th/19th century landscape garden designer, who had a serious accident late in life that disabled him, to explore the extent to which his physical disability (impaired mobility, wheelchair use) influenced his garden design, if at all.

saw you yesterday at the garden academy in münster. you don’t look disabled in any way, i just enjoyed your lecture and am going to buy your book. by the way, i am diagnosed with multiple sclerose and write to you to tell you that it is a personal pity to have a desease, but in the long end it doesn’t really matter. it makes people more concentrated, powerful and effective and me perhaps a bit more obstinate to do my things. greetings from rainy münster!